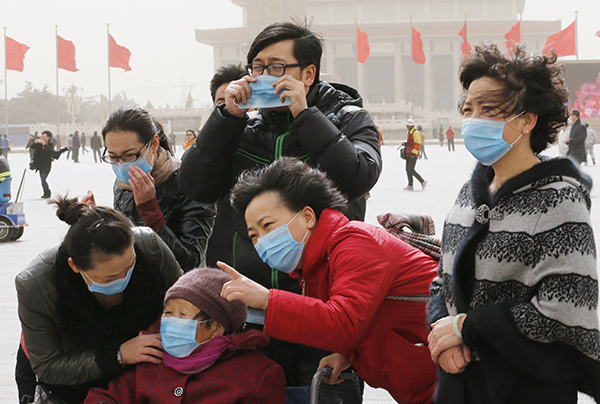 When I first became a correspondent in Beijing, I installed an application on my phone named “Air in Beijing.” I had never thought of using such an app when I was in Korea, but now I check it several times a day. The application shows the concentration of fine-particle dust in the air. Now, it reads 411, with a note that people should refrain from outdoor activities when it is higher than 350.

Lawmaker Park In-sook, a pediatrician, visited Beijing last week amid the thick smog, and she advised me to get X-ray checkups every six months and to send my children back to Korea. However, as a journalist, my job calls for me to run to the places with the heaviest smog to cover the story.

In fact, 1.4 billion Chinese are destined to live with unbearable levels of air pollution. To foreigners who just arrived in Beijing, the Chinese seem almost insensitive. Automobile exhaust emissions are one of the three major causes of the smog, and the authorities encourage mass transit. But the beltway around Beijing is jammed all day long.

Government leaders have been advocating environmental preservation for more than a decade, but recycling and separate trash collection are not mandatory in Beijing.

The problem is that China’s smog does not remain in China. When smog occurs in Beijing, it almost always travels to the Korean Peninsula the next day. The Yellow Sea (called the West Sea in Korea) between China and the peninsula is too narrow to filter away the pollutants. That’s why we can no longer overlook China’s air pollution.

Given the serious level of smog from all sources of contamination, international cooperation is desperately needed. Many Chinese people still feel grateful that the Korean government and civilian groups helped plant trees in China’s western regions to prevent desertification. It is about time that we work together to research and develop environmental technologies to reduce smog. Japan is in the same situation.

Last week, 41 lawmakers came to Beijing to meet with Chinese leaders. They discussed North Korean nuclear issues and the free trade agreement, and criticized Japan’s distorted historical perspective. However, there was no mention of cooperation on smog reduction. They may not have time to address the issue now, but it does need to be addressed. After I came to Beijing, I realized that people need to breathe to live.