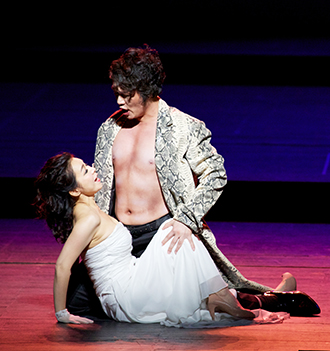 How honest are you about expressing your inner truths and fulfilling them? That’s the question Jung Sun-young, the director of the latest Korean production of Mozart’s opera “Don Giovanni,” wants audiences to ask themselves.

Often called the “greatest opera Mozart left behind,” “Don Giovanni” is considered the work that broke the once-rigid boundary between comedy and tragedy.

The lead, Don Giovanni, “enjoys a freewheeling lifestyle, taking pleasure in conquering women, seducing them with his supernatural sensitivity and his somewhat diabolic charms,” according to Korea National Opera’s description.

Jung, the director of the Korean production of the Italian opera, interpreted Don Giovanni as not just as a womanizer but a man with strong inner desires that he is able to make come true.

“When I studied the character, a question came into my head. ‘Jung Sun-young, how honest are you about your inner truths? How much are you living it out?’?” said Jung.

“I felt as though something hit me on my head. That is something I can’t do, as we are bound by so many social obligations. The experience came to me as a mid-life crisis. I felt sorry for myself. Finally, after reconciling with myself, I believe I have become happier. Now I want to share this experience with the audience and raise the same question.”

Her way of showing that struggle was to bring a giant apple to the stage, hanging by a thick wire. “The apple symbolizes one’s inner desires, while the tension of the rope is the struggles we encounter between our desire and social obligations,” said Jung.

Kicking off March 12 and running to March 16 at Seoul Arts Center’s CJ Towol Theater, “Don Giovanni” is the Korea National Opera’s first of its “Mozart Cycle.” The Towol seats just 1,000 people, much less than the 2,200 that can fill the center’s Opera Theater, where operas are usually held. The goal of having it at the Towol is to recreate a more authentic atmosphere.

“During Mozart’s time, the theater only seated about 500 people,” said soprano Yang Ji-young, who plays Zerlina, a peasant girl Don Giovanni seduces. “In an intimate space, Mozart’s music can be truly enjoyed.”

Marco Zambelli, an Italian maestro, was invited to lead the orchestra for the Korean production. Zambelli says he intended to “lead the music with respect for Korean singers.”

“We should never forget that in 18th century and in the beginning of 19th century as well, the singer was the king, much more than the composer.” said Zambelli.

“When Mozart was writing music for the operas, in some instances, he had to do what his singers wanted to sing.