Signs of the times: Artist uses hip-hop lyrics for his creations

Signs of the times: Artist uses hip-hop lyrics for his creations 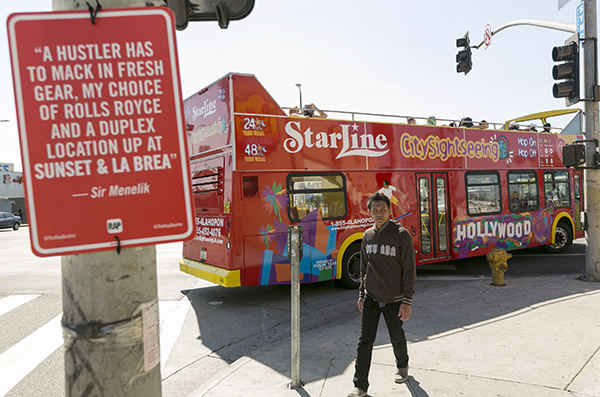 In this photo taken on Feb. 21, a pedestrian passes by a picture of a hip-hop themed sign at the intersection of Sunset Boulevard and La Brea Avenue, in Los Angeles. Street artist Jay Shells installed the sign. [AP/NEWSIS]

LOS ANGELES - Artist Jay Shells was in his New York City studio last year, painting while listening to rapper Big L, when some lyrics booming through the room grabbed his attention: “On 139 and Lenox Ave, there’s a big park. And if you’re soft, don’t go through it when it gets dark.”

Shells, 34, knew that park. It was just up the street in Harlem. That’s when he got an idea to take Big L’s words, put them on an official-looking city street sign and hang it at that very intersection, a sort of historical marker for hip-hop.

A year later, Shells has put up dozens of carefully drawn, hand-screened signs in New York and Los Angeles, celebrating rap through the words of Jay Z, Nas, Snoop Dogg and pretty much anyone else who’d ever busted a rhyme about a particular place and time.

The signs were so popular that they disappeared within a day or two.

“That’s kind of part of the deal,” he said. “If you put something out there the public will take it if they like it. I’m OK with that because I would probably do the same thing.”

Now, an artist who has been described as having graphic art skills reminiscent of Andy Warhol’s and who cites the street-art sensibilities of Banksy as among the work he admires is remaking 90 of the signs (45 from each coast) for an exhibition scheduled to open April 25 at LA’s Gallery 1988 East.

“Never in my 10 years of owning a gallery have I ever been sent a link to artwork as many times as I was with his work,” the gallery’s owner, Jensen Karp, said of bringing the artist’s signs to Los Angeles for a monthlong showing.

As an artist, Shells, whose given name is Jason Shelowitz, does more than just make signs. His work ranges from portraiture to pop art, graphic design to fine art. He has an exhibition of fine-art wood burnings opening in New York in March.

Like Warhol, Karp said, “he is that rare example of someone who is capable of perfectly making graphics and then also doing something very artistic with it.”

He gained some attention four years ago with his The Subway Etiquette Project, papering New York’s subways with artfully designed and screen-printed posters telling people to refrain from such boorish behavior as picking their noses and trying to fondle fellow riders.

“It was just compounded by years of riding the subway and seeing disgusting rude people and deciding I gotta do something,” he said.

Shells did worry a bit at the time about getting in trouble, which led to his signing the posters with his childhood nickname. By the time transit authorities figured out who was putting them up and told him to knock it off, collectors had grabbed them all.

Next came a volunteer public service effort to get New Yorkers to clean up after their dogs. Posters and little plastic doggie-doo bags began popping up around parks. Then came “The Rap Lyrics Project.”

Soon the lyrics to Jay Z’s “Where I’m From” went up on a utility pole in front of The Marcy Houses in Brooklyn.

“Cough up a lung where I’m from Marcy Son, aint nothin’ nice.”

At the Verrazano Narrows Bridge that connects Brooklyn to Staten Island were the words of Capone.

“I did it for the love of cash your honor, traffickin’ cross the Verrazano, coke dealin’ marijuana.”

In Manhattan, in his Puff Daddy persona, Sean Combs proclaimed:

“ ... I’m bigger than the city lights down in Times Square.”

When people started taking the signs, Shells wasn’t upset. “To be honest, from a legal standpoint it’s a pretty good thing for me,” he said, explaining that what he is doing, after all, is vandalism.

“If they’re gone, then there’s no real trouble for me to get into,” he said with a laugh.