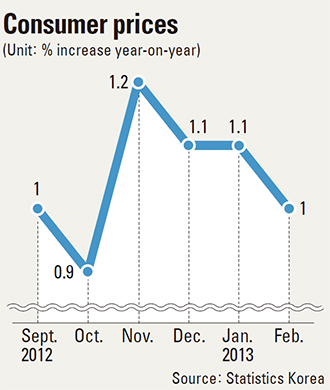 Consumer prices posted growth of more than 1 percent in February for the fourth consecutive month, largely due to more expensive processed food.

Since November, consumer prices have grown steadily each month, though they remain below the Bank of Korea’s target of 2.5 percent to 3.5 percent.

Earlier this year, the central bank projected that consumer prices would grow 2.3 percent by the end of 2014. In January, Governor Kim Choong-soo said inflation will likely pick up in the second half of the year as the economy continues to recover, adding that it will land within the target range. The BOK’s outlook is for the economy to expand 3.8 percent this year.

Food and beverage companies this year have competed to raise the prices of their products, citing higher prices for raw materials and management costs.

Meanwhile, prices for fresh produce and seafood dropped 12.7 percent year-on-year in February, but they edged up 2 percent compared to the previous month.

Fresh vegetable prices plunged more than 25 percent year-on-year, thanks in large part to mild winter weather. Napa cabbage, which is the main ingredient used in making the Korean staple kimchi, saw its price plunge 58.7 percent, even though winter is traditionally the season for peak demand. Chili powder, also a key ingredient in kimchi, saw its price drop 23.4 percent year-on-year.

In a press release yesterday, the Finance Ministry projected that year-on-year consumer prices this month will likely increase more than they did last month due to an unusually low rate in March 2013 attributable to free child care and other welfare programs.