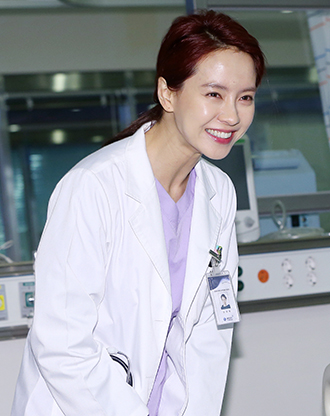 “As I’ve been working with Gary for more than three years, I was pretty comfortable acting with him in the drama,” said the 33-year-old actress yesterday, at an interview in Gyeonggi.

For the sixth episode of the show, Gary appeared as a chauffeur who took Song home after she got seriously drunk.

“I’m happy that his appearance got positive feedback from viewers,” added the actress.

Gary and Song won fans all over Asia for their work on the SBS entertainment show “Running Man.” They also won the best couple award at the 2013 SBS Entertainment Awards.

“Emergency Couple” follows the reunion of a divorced couple in an emergency room. Song and actor Choi Jin-hyuk appear as interns on the show.

The latest episode of the show had ratings of 4.1, which are considered high for a cable channel drama.