Amp up your travel - see Jeju by electric car

Amp up your travel - see Jeju by electric car 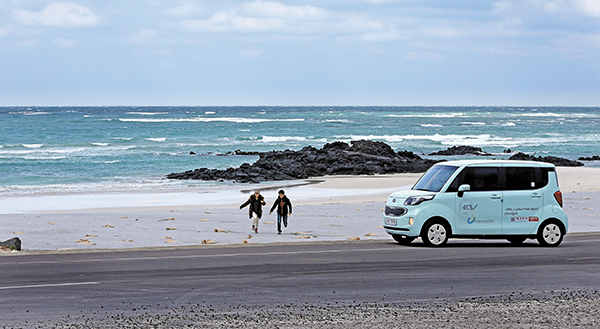 Although much of Korea is enduring one last cold spell before the spring comes, down on Jeju Island the rapeseed flowers are already in bloom, covering the hills with a beautiful yellow.

While Jeju has long been a popular getaway for people from the mainland, especially when it’s cold, now there’s a new way to enjoy the southern island - traveling by electric car.

Traveling by electric car is inexpensive. Charging stations are still free, as the government tries generating demand for the new technology, and you can rent a Kia Ray for just 17,500 won, or $16.50, per day.

SK Networks started offering electric cars for rent in January, and the company says that people are hiring around 10 cars a week. Another company, KT Kumho, also says it intends to offer electric cars to rent soon.

All in all, there are 28 electric cars available to rent now, and 30 more are expected to be added soon.

Jeju has a good reason for encouraging the use of electric vehicles. It is trying to protect its famous environment, which includes many sites recognized by Unesco, as part of its Global Geoparks Network.

Out of 1,871 electric cars registered in Korea as of late last year, 360 are in Jeju. The island also has 497 charging stations, more than 25 percent of Korea’s 1,962. In fact, the ratio of electric cars to regular petroleum vehicles is five times higher on Jeju than in the mainland.

“Electric cars cannot go more than 100 kilometers [62 miles] on a full charge, but there are enough charging stations set up all across Jeju Island, and that helps people drive more electric cars here than any other region,” said Lee Chung-ryeol of the Korea Environment Corporation.

“Jeju Island is aiming to have only electric cars by 2030 because it is trying to make itself free of carbon emission,” said Kim Hong-du, a manager at the Jeju Special Self-Governing Province.

To get into the environmental spirit on Jeju, the JoongAng Ilbo decided to travel the island by electric car, visiting every nook and cranny we could get to.

Jeju is not that large, and even without any pressing itinerary there is no reason for a driver to stay behind the wheel for more than three or four hours.

Here are some tips I came up with after driving around the island for a couple of days. 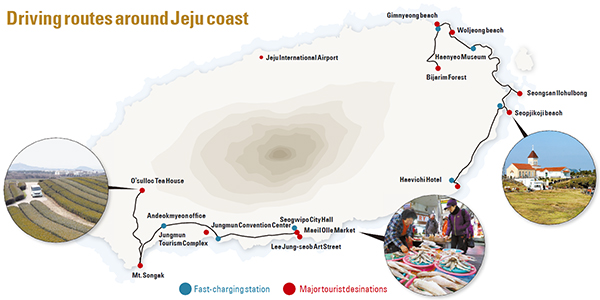 Powered by an electric motor instead of an internal combustion engine, our car - a 1,000 cc Kia Ray - did not make much sound at all.

It was interesting to see how an electric vehicle functions. When going quickly or traveling uphill, the battery runs down, but when slowing or going downhill, the car charges the battery. It was also amazing to drive around without an exhaust pipe on the back.

The car has much more power than I expected. Jeju does not have any expressways, so it is hard to go that fast, but when I pressed the accelerator the car easily reached 100 kilometers per hour.

Left: A driver connects the battery-charging cable to her electric car. Right: An electric car can only be charged using a card issued by the Ministry of Environment.

For a limited time only

The biggest issue with electric cars is how long a charge can last. Officially, Kia says my car should be able to go 135 kilometers on a full charge. But when I used the fast-charging feature, my car could only make it 80 kilometers. Even when using the regular charger, I was able to drive the car just 91 kilometers.

But how long a battery charge lasts seems to depend a lot on a driver’s habits, the condition of the road and how many features, like the radio or heater, are used.

On the last day of my travels around Jeju, the dashboard indicated that I had 50 kilometers left on my charge. Since the airport was around 35 kilometers away, I assumed I would be fine.

However the trip to the airport had many hills, and my battery died much sooner than I expected. I had to turn off the heater and other devices and travel slowly just to keep going. Fortunately, I found another charging station along the way, but its fast-charge socket was already occupied by another driver. With my flight time approaching I had to ask to cut in and charge my car for about two minutes . Fortunately, two minutes was enough for another 15 more kilometers, and I just made it to the airport.

In general, it was very disturbing to need to check the driving distance and battery constantly and keep an eye out for charging stations. I had to recharge the car five times over my two-day, 230-kilometer trip. If I had driven the same distance with a gas-powered vehicle, I would have needed to refill at a gas station just once.

Some popular sites around Jeju Island include, from top, fields of rapeseed flowers near Seopjikoji; Bijarim Forest; the Teddy Bear Museum; and the Haenyeo Museum, which is dedicated to the culture of women divers on Jeju island.

The great part of driving an electric car was that I did not have to pay anything for fuel. Charging electric vehicles in Korea is still free. If I were to drive the same distance in a gas-fueled car, I would have spent at least 50,000 won for gas, or 30,000 won for a liquefied petroleum gas-fueled car.

“We decided to rent an electric car because it was cheap,” said Yu A-jin, a student from Goyang, Gyeonggi, who was travelling with friends.

She said they paid just 70,000 won to use the car for four days. “We have been driving around the coastline for three days, and we don’t see much difference from a normal gas vehicle.”

However, driving an electric vehicle will get a bit more expensive from as early as next year, according to the Ministry of Environment, because it will begin to cost about 2,000 won to charge a battery fully.

A snap to charge the battery

Refueling the car at a charging station is rather simple. Each car comes with a card from the Ministry of Environment, and you just touch the card to the charger and then connect the cables.

When I stopped for a quick charge, just enough to go another 33 kilometers, I needed about 15 minutes - enough time for me to have a cup of coffee and read a couple of news stories on my smartphone.

There are nearly 500 charging stations around Jeju Island, many of them located around major tourist attractions, including Seongsan Ilchulbong, the volcanic peak on the east side of Jeju, and near the office buildings of public organizations. The locations of charging stations can be found online at www.evcis.or.kr.

Many tourist attractions also have parking spaces for electric cars, which are marked with blue lines, and vehicles parked there to recharge get a discounted rate on parking fees. Considering that hiking up to the peak of a mountain and then having a meal at a nearby restaurant can take around three hours, that’s enough time to half-charge your battery using a regular-charge option.

Why is Kia’s Ray so popular?

One of the biggest problems with electric cars is that each make has a different charger based on its model. There is an international standard for regular chargers, but not for the fast-charge option, and each carmaker has come up with different technologies.

But most of the express charge systems around Jeju are designed for the Kia Ray, which is the major reason why that particular car is the most common electric car on the island.