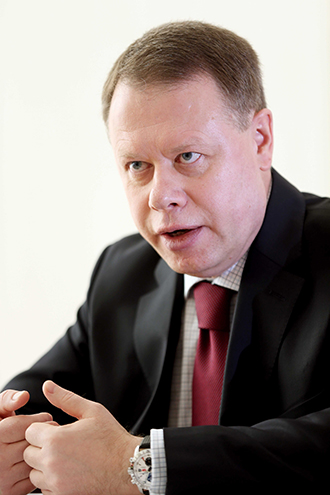 Russia is setting “a very dangerous precedent,” especially in regard to nuclear nonproliferation in countries like North Korea, and its military escalation in Crimea is a threat “not just for Ukraine but for Europe and modern international law,” Ukraine’s top envoy to Seoul said in an interview.

“Crimea is a part of Ukraine and we are, of course, opposed to any separatist movement in Crimea,” Ambassador Vasyl Marmazov said Wednesday at the Embassy of Ukraine in Yongsan District, central Seoul, as he sat for an interview with the Korean JoongAng Daily and the JoongAng Ilbo to discuss the crisis there.

Further exacerbating tension on the Black Sea Peninsula, Crimean local lawmakers on Thursday voted in favor of joining Russia, and the decision would come into force if approved by its people at a referendum to be held later this month. The United States and the European Union responded strongly with coordinated sanctions on Russia’s move to seize Crimea in violation of Ukraine’s sovereignty.

In a follow-up written interview yesterday, Marmazov said that “this so-called referendum contradicts the Constitution of Ukraine” as well as international law.

Also on Thursday, a group of unarmed military observers from the Organization for Security and Cooperation (OSCE) in Europe were sent to Crimea at the request of Ukraine but were later turned back by unidentified men as they tried to enter the region.

“And I am confident,” Marmazov said, “that by this action, the Russian side is trying to hide evidences of its aggression from the international community.”

He added that the acting president of Ukraine said that its national parliament would initiate procedures to dissolve the Crimean legislature.

“I don’t think the people of Crimea would like to be some kind of gray zone on the world map,” or that it would be beneficial to the Crimean population, Marmazov said Wednesday.

The top envoy highlighted that such actions from the Russian Federation undermine not only the security system of the European continent but the existing international guidelines set up to prevent the spread of nuclear weapons, especially taking into account issues with North Korea.

“After the fall of Soviet Union [in 1991], we had the world’s third-largest nuclear arsenal, he said. “And we voluntarily moved this nuclear arsenal from our territory.”

Through the 1994 Budapest Memorandum, Ukraine agreed to eliminate all of its nuclear weapons within the next several years, and in return, the United States, Russia and the U.K. pledged to respect its territorial integrity. “In Korea, it’s well known that the Ukrainian example is a model to make North Korea a non-nuclear state.”

In the process of attempting to denuclearize North Korea, he added, it may be pointed out that “Ukraine moved its nuclear arsenal, and one of the country guarantors of this status [Russia], directly intervened in the internal affairs of Ukraine.”

Such a bad precedent may backfire on Russia and “be like a boomerang, maybe 10, 15 years later,” Marmazov said. “Because Russia is a big country with different regions .?.?. Russia could face a lot of challenges in the future.”

“Any Ukrainian government would be looking for good pragmatic political and economic relations with big neighbors such as the Russian Federation. But Ukraine is a part of Europe and holds as a priority closer integration with Europe,” he added.

The Ukrainian crisis has raised international alarm as massive protests broke out in late November after President Viktor Yanukovych’s government announced plans to abandon an association agreement to strengthen ties with the EU.

The situation has escalated over the last three months, leading to gunfire and bloodshed, and the Ukrainian parliament voted on Feb. 22 to remove Yanukovych. An interim government in Kiev, which Russia calls illegitimate, was appointed on Feb. 26. President elections are slated for May.

While Marmazov emphasized that Ukraine is not looking for “military confrontation with Russia,” he added that if the situation is exacerbated, “Russia would obtain a very dangerous, unfriendly state on its border.”

“We are a very tolerant state, he said, and besides Russians, “we have a lot of other national minorities - Poles, Hungarians, Belarusians, Romanians, Jews, Tatars, even 30,000 ethnic Koreans.”

For any government of Ukraine, he said, “the great challenge is to find the right balance among national culture, languages and respect of national minorities in Ukraine, with, first of all, a big Russian minority.”