Illegal subsidies back as ban nears

Illegal subsidies back as ban nears 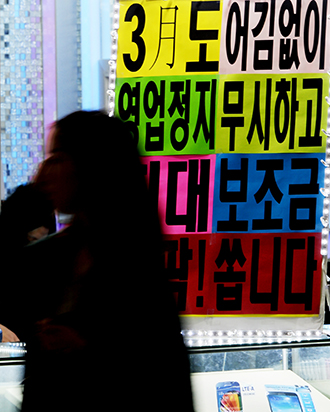 Even after mobile operators were handed unprecedentedly long business suspensions that will take effect starting Thursday, illegal subsidies emerged again on the Internet and at smartphone retailers over the weekend.

According to the mobile communications industry yesterday, some retailers offered subsidies online of as much as 800,000 won ($750) Friday and Saturday.

Though the subsidies did not reach their peak of 1.4 million won, set last month, they easily exceeded the 270,000 won ceiling set by the government.

The Ministry of Science, ICT and Future Planning announced Friday that it would impose staggered business suspensions of 45 days each on SK Telecom, KT and LG U+ from Thursday through May 19 for violating a corrective order involving excessive smartphone subsidies.

The sanctions include prohibiting carriers from enrolling new subscribers.

“The mobile carriers even sent messages to smartphone stores they operate to prepare for another notification to consumers that there will be subsidies offered,” said an industry source.

“It is only a guerrilla marketing tactic that banners [advertising] subsidy offers quickly appeared and disappeared for short periods over the weekend. We can’t say that the whole market was overheated,” said a smartphone retailer.

Accordingly, the Korea Communications Commission (KCC) said yesterday it would impose an additional penalty on the mobile carriers.

Though details of the sanction were not revealed, the KCC is expected to issue additional business suspensions of at least 15 days.

If the KCC imposes suspensions on mobile carriers, they will likely take effect sometime after May 18, when the ICT Ministry’s sanctions end.

The KCC plans to determine the level of the sanction at its general meeting scheduled for Thursday.

However, while the business suspensions could dramatically reduce marketing costs for mobile carriers, they are likely to be a setback for smartphone retailers and manufacturers.

Mobile phone retailers nationwide plan to demonstrate Thursday against the KCC at the Gwacheon Government Complex, where the KCC meeting will be held.

“If the KCC imposes the business suspension, it will be too harsh for retailers and further cause inconvenience for consumers,” said an industry source.

“We hope the KCC will consider the market situation and adjust its plan for a sanction.”

As for smartphone manufacturers, the most attention goes to the Samsung Electronics flagship Galaxy S5, which is scheduled to be launched April 11, during the period when carriers are banned from offering subsidies to enroll new customers.

Although the S5 has a large volume of overseas sales, it seems that the sanction will inevitably affect its sales in the domestic market.