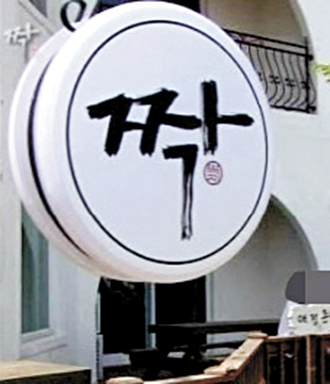 A sign for the reality program “Jjak,” which was shut down after the suicide of one contestant. [JoongAng Ilbo]

Authorities investigating the suicide of a female contestant who was filming an SBS matchmaking reality show are now turning their attention to the raw video footage made during the program’s taping, investigators said at a briefing yesterday.

“As SBS said it would submit the entire recordings for the investigation, we have sent them five hard drives,” said a police officer of the Seogwipo Police Precinct in Jeju. “We will carry out the investigation once we receive all the recordings to see whether she was coerced into filming.”

The recordings reportedly total between seven and eight terabytes, enough to hold hundreds of HD movies, and SBS expects to need several days to copy them all.

The officer added that the police will check to make sure the videos were not manipulated or deleted by the broadcasting company.

According to the police, the producers and crew of “Jjak” (or “Couples”) would be charged with a crime if evidence indicated criminal coercion - that undue pressure to film scenes was placed on the 29-year-old contestant, who has been identified only by her surname, Jeon.

The authorities previously examined Jeon’s phone call logs and text messages, but could not find any substantial evidence against the program’s production team.

Experts are divided over how liable producers or others on the staff of “Jjak” could be for Jeon’s suicide.

“The key factor is whether she felt humiliated or was afraid of losing her honor or assets,” said Kim Mun-ho, a professor at Honam University. “The production team members can be charged with criminal coercion if Jeon was forced into shooting after saying she did not want to.”

But others say it would not be so easy to build a case of criminal coercion charges, noting it is hard to show Jeon was forced with others around.

“Even if [the production team] is not charged with criminal coercion, [her family] may receive compensation because the broadcasting company neglected its duty to protect the contestant,” said Gang Seong-du, a communications director of the Gwangju District Bar Association.

The police also explained a two-and-a-half hour video clip filmed in Jeon’s room, although they did not show the footage to protect Jeon’s privacy. According to the police, Jeon entered and left the restroom four times from 12:50 a.m. to 1 a.m. on March 5. She was found dead at 2:15 a.m.