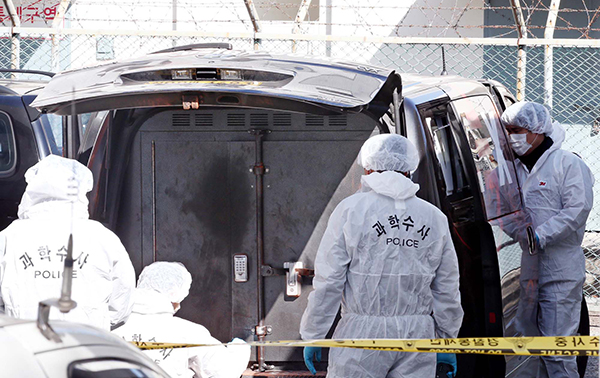 Forensic investigators carry out a search on a money transport van yesterday at the Geumjeong Police Precinct, Busan. The vehicle was stolen yesterday morning. When the van was found 11 minutes later, all of the cash inside the vehicle was gone. By Song Bong-geun

A money transport van carrying cash collected from expressway tollgates was stolen yesterday morning near Busan, according to authorities. The police are pursuing a key suspect who formerly worked for the company responsible for transporting the money.

At around 3:28 a.m. yesterday, two employees from a money transport company parked a security van in front of the Busan tollgate and came into the office to collect the money, according to authorities at the Busan Geumjeong Police Precinct. The van was already carrying about 219 million won ($205,288) from expressway tollgates in North and South Gyeongsang.

Emergency bells sounded a few minutes later after the two employees entered the office. When they came out to check on the vehicle, the suspect was already driving away.

The two workers told police that they had turned off the engine, left the keys in the van and locked the door from the outside with a remote controller before heading into the office.

When the police were alerted of the case and checked the van’s location, its global positioning system (GPS) confirmed that the vehicle was heading toward Busan. It was found 11 minutes later, just four kilometers away from where it was stolen. When police arrived on the scene, they found that the eight sacks of cash within the safe were missing.

A safe commonly sits in the back of a money transport vehicle, and drivers are capable of accessing it from the driver and passenger seats, as well as through the back door.

Authorities said they could not identify the suspect because CCTV cameras were not available where the van was parked. Additionally, the camera pointing toward the road on which the suspect drove the van was found to be broken.

The police suspect the crime was precisely planned by someone familiar with the money-collection process, given that by the time the van arrived at the Busan tollgate, it would have already been loaded with a large amount of cash after having passed by several other tollgates in the region. The perpetrator, they said, would have easily been able to pinpoint an escape route.

Police said yesterday that they have zeroed in on a key suspect in the case - a former employee of a major money transport company who quit last year.

Authorities also assume there may have been another vehicle prepared in advance to help move the cash, which was divided into eight sacks - each weighing nearly 10 kilograms (22 pounds) - in such a short time.

They are currently investigating how the perpetrator was able to access the safe and why the two employees left the vehicle unattended with the key inside and whether their conduct went against regulations.