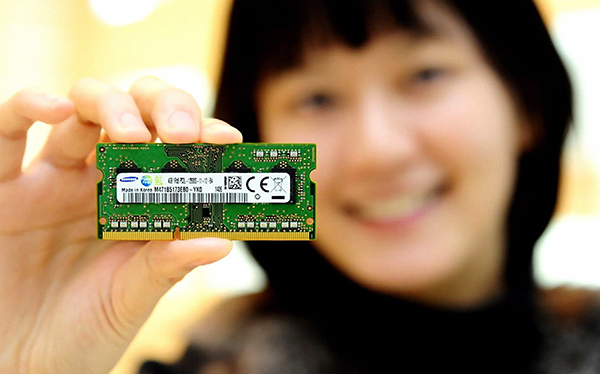 A Samsung Electronics employee holds a 4-gigabit, 20-nanometer DRAM, which the company has succeeded in mass producing for the first time in the world. Provided by the company

Samsung Electronics said yesterday it has begun mass production of a 4-gigabit, 20-nanometer dynamic random access memory (DRAM) chip this month for the first time in the world.

“Until now, the miniaturization technology has reached its limit, but Samsung made a breakthrough in further minimizing the size of the chip,” said a spokesman for Samsung Electronics.

“Also, the smaller PC RAM means lower power consumption; thus, when smaller ram for mobile phones is developed in the next six months or so, consumers will likely enjoy longer battery life.”

A nanometer is one billionth of a meter.

Samsung has opened a new chapter in memory technology by beginning to mass produce 4-gigabyte DRAM chips and breaking the limits of miniaturization for 20-nanometer DRAM chip technology with its own technology and existing facilities.

“The low-power, 20-nanometer DRAM will expand its presence in the PC market and mobile market and become the flagship product,” said Jun Young-hyun, head of the memory business sector of Samsung Electronics. “In the future, we will contribute to the growth of the world’s IT market by launching the next generation of high-capacity DRAM and green memory solutions.”

Meanwhile, according to market research firm Gartner, the world’s DRAM memory market is expected to grow more than $2 billion to reach $37.9 billion this year compared to 2013.

In the case of Samsung’s semiconductor business, its robust and continuous growth has played a major role in offsetting a decline in Samsung Electronics’ sales, according to industry sources.

Based on Samsung’s advantage in micro-processing technology and growing worldwide demand for mobile memory chips, the company’s export business has been booming, posting double-digit growth for 12 consecutive months.