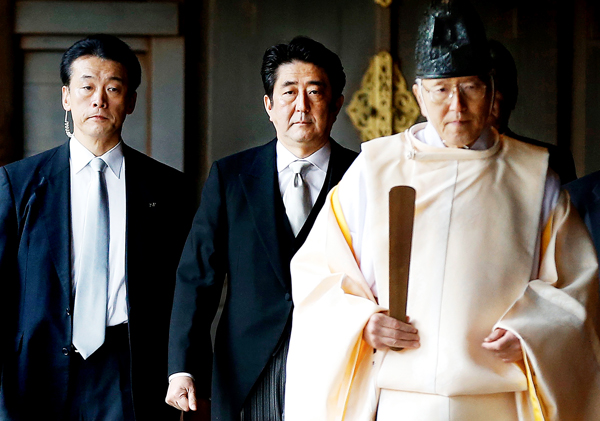 The question might sound disrespectful. But I can’t help asking it as I survey the placards at anti-government rallies commemorating the third anniversary of the Fukushima earthquake and tsunami, which left almost 20,000 people dead or missing and erased entire towns. “Abe is AWOL,” says one. Another: “Nationalism Doesn’t Create Jobs!” The one that moved me most was carried by a 30-something mother wearing a “No Nukes” T-shirt: “My Kids Still Can’t Play Outside.”

After 1,095 days, untold billions of dollars of public expenditures and countless pledges to accelerate rebuilding efforts, radiation is still leaking at Fukushima. Only 3.4 percent of planned public-housing projects are close to being completed. A whole generation of kids in the northeast Tohoku region are tested regularly for thyroid cancer. They can barely remember anything but temporary housing, and must wonder if outdoor playgrounds really exist.

If Prime Minister Abe spent even a fraction of his time helping tsunami-devastated towns and Fukushima’s nuclear refugees instead of fighting with Japan’s neighbors over history, Tohoku citizens would be much better off. Unfair criticism? Abe’s image-makers certainly think so; they play up his 13 visits to Tohoku since December 2012.

The official reason for the glacial pace of reconstruction is a shortage of labor, building materials and bids from the construction industry. The real problem is that the Tokyo political establishment has largely forgotten about Tohoku.

Although Abe inherited this problem, his blinders seem to be growing in size with each passing month. His direct predecessor Yoshihiko Noda also made frequent visits to Tohoku, as did Naoto Kan before him. How is it that a nation known for hyperefficiency, one that surged from the ashes of World War II to threaten U.S. economic dominance for a time, could fail at so obvious a task? Chronic inattention.

Daunting as it is, the scale of the problem is no longer an acceptable excuse for abandoning 100,000 people in temporary accommodations that are cold, spartan and devoid of privacy. Let’s take the government at its word that it’s having difficulty attracting builders - just offer them more money. Abe’s team claims there’s a labor shortage, something they should’ve considered before lobbying for the 2020 Olympics. Why not import 10,000 construction workers from elsewhere in Asia? The ends would justify the means in a nation that suffers from a shrinking workforce. And the jolt provided by big new projects could give the economy a boost.

Yes, Japan is bureaucratic, and these things take time. But Abe, who enjoys a majority in both houses of parliament, has had 62 weeks to get his cabinet members, lawmakers and reconstruction officials into a room together to cut red tape and demand action; 440 days to ease the pain of those still reeling from what Japanese call “3/11”; 10,560 hours to demand that the Liberal Democratic Party’s construction-industry cronies, who have made huge profits clearing away debris, do more to rebuild and decontaminate areas around Fukushima to acceptable levels.

Abe had enough time to visit Buenos Aires to reassure the International Olympic Committee that Fukushima’s radiation was “under control.” His schedule has included trips to Turkey and India to sell nuclear technology on behalf of Japan Inc. The prime minister’s itinerary takes him to places as diverse as Ireland, Malaysia, Mozambique, Oman and even Wall Street to convey that “Japan is back” and ready to be assume a renewed leadership role in Asia.

But the government’s inability to handle its crisis at home belies its global ambitions. Time that should be allotted to sorting out Tohoku is squandered debating World War II atrocities, teaching “patriotism” to school kids, staffing national broadcaster NHK with like-minded conservatives and defending a prime ministerial visit to Tokyo’s Yasukuni Shrine, where the souls of 14 Class-A war criminals are enshrined among other war dead. Abe seems to believe Japan has been victimized by history. So why is he ignoring Japan’s current victims?

For a leader who cloaks his most controversial policies in an aura of patriotism, Abe has a strange way of showing his love for Japan. An area that’s home to more than 9 million Japanese could use more affection - and attention - from Tokyo. Like myself, Tohoku residents could be excused for wondering why a bunch of dead soldiers appear to hold more fascination for Abe than they do.