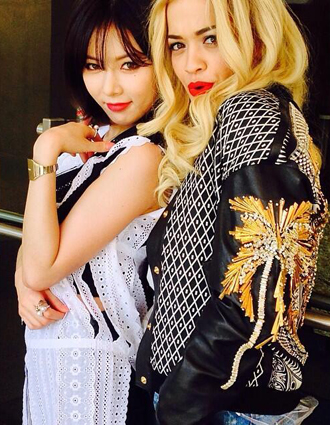 Kim Hyun-A of the group 4Minute is the latest K-pop star to appear on the U.S. comedy website Funny or Die, local media reported yesterday.

“Hyun-A was in Los Angeles filming for the website with singer Rita Ora,” said an official from Kim’s agency, Cube Entertainment. “If you are curious about what she filmed with Ora, you can check it out on the website.”

Funny or Die is a website founded by actor-comedian Will Ferrell and comedy writer Adam McKay. It has more than 7.8 million followers on its Twitter account and generally posts goofy videos, both user-generated content and videos by celebrities.

As for Hyun-A, the 21-year-old singer performed in a Korean showcase yesterday (Korea time) at the South by Southwest music festival in Austin, Texas, along with Jay Park and several Korean indie groups.