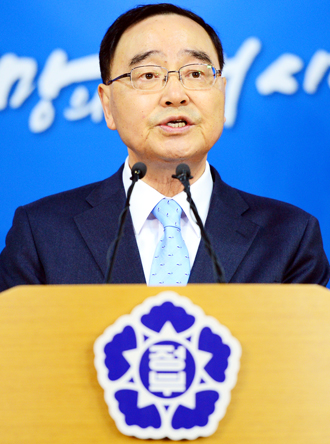 Amid an escalating standoff between doctors nationwide and the government, Prime Minister Chung Hong-won yesterday called for a dialogue between the two parties. The move comes as physicians at large university hospitals and local clinics plan to participate in a second strike, scheduled to last from March 24 to March 29.

The Korean Medical Association opposes the government’s plan to adopt remote medical treatments and allow large hospitals to set up for-profit subsidiaries that will serve auxiliary functions, such as research and development and as facilities for medial tourists.

Strikers have also demanded that the government raise medical fees, saying that they are considerably underpaid for their work.

“[The government] can’t stand the doctors’ strike anymore,” said Prime Minister Chung in a statement. “We need to talk and discuss ways to resolve these issues so that we won’t make the public suffer inconveniences.”

The call for dialogue appears to be a step back from the government’s previous heavy-handed position toward the protesters. Doctors nationwide staged a one-day collective strike on Monday, with many clinics shutting their doors or limiting their services.

On Tuesday, the prime minister warned that those involved in the strike would be held accountable and be subject to punitive measures. The Ministry of Health and Welfare stressed that it would consider suspending the licenses of doctors participating in the strike if they extended their protest.

The shift in the position appears to be intended to appease doctors before the second strike, in which a larger turnout is expected. Doctors-in-training at large hospitals, including Seoul National University Hospital and Asan Medical Center, are expected to participate in the next strike. They were not present in the first walkout, which had lower-than-expected attendance.

Less than a third of local clinics joined Monday’s strike, according to statistics from the Ministry of Health and Welfare. Some 8,339, or 29 percent, of the 28,691 local clinics nationwide were present for the walkout. However, the doctors’ association estimated the participation rate to be about 49 percent.

In order to keep up the momentum, the doctors’ association said on Tuesday that, in protest, some local clinics have decided to cut operational hours to 40 hours a week, or about five hours a day, seeing each patient for less than 15 minutes. Neighborhood hospitals will continue to enact those measures until the second strike.

However, doctors-in-training at large hospitals who cannot willfully change working hours will wear black ribbons in a show of protest.

Despite the prime minister’s call, an uphill battle remains. The government still looks to go ahead with the plan to adopt a telemedicine system, which Chung confirmed.

“The remote treatment system is aimed at facilitating treatment for those living in far-flung areas or who have limited mobility,” he said.