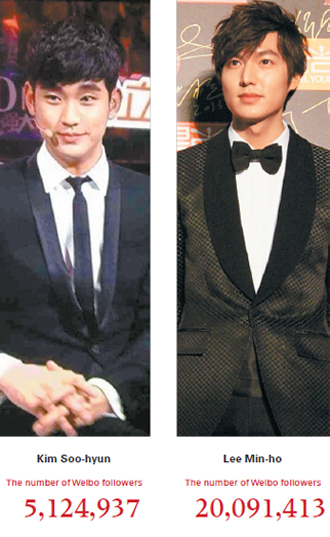 Just as it looked like the Hallyu boom in Japan was dying down - perhaps a victim of recent political tensions - the love of Korean content is once again booming in China, thanks to the drama “My Love From the Star.”

Chinese government officials even discussed the latest Korean Wave splash in the National People’s Congress, and The Washington Post reported on the reasons behind the success of many shows there.

Wang Qishan - one of seven members of the Communist Party’s Politburo Standing Committee and the head of the party’s internal discipline commission - asked his peers at last week’s National People’s Congress meeting about the drama’s boom. He questioned the source of power of Korean dramas and wondered why China has not yet made a hit that big. “Korean soap opera is ahead of us,” he said. “The essence and soul of their drama is in an adaptation of Chinese traditional values.”

“My Love From the Star” is the story of a human-looking alien, played by Kim Soo-hyun, who has been stuck on Korea for 400 years and who falls in love with an A-list actress. The series finished its 21-episode run in Korea on Feb. 27 with a strong nationwide rating of 28.1 percent.


What is different from past Korean successes in China is that now Korean variety shows are also on the menu, in addition to soap operas and K-pop.

The Korean Wave in China peaked about a decade ago, after such dramas as “Daejanggeum” (also known as “Jewel in the Palace”) in 2003 and “Full House” in 2004, but after that, no series was able to reignite the fire. To make matters worse, the government even banned foreign soap operas from being aired in prime time on Chinese television.

But since last year, Chinese broadcasters started to import formats, creating their own versions of Korean reality shows like “I Am a Singer,” “Superstar K,” “Hidden Singer” and “Dad, Where Are You Going?”

“Dad, Where Are You Going?” was especially popular in China, where fathers similarly started taking their children on trips to rural areas without their mothers. Enthusiastic viewers compared the Chinese version and the original Korean version to see the differences in each culture’s education systems. The show was even adapted into a mobile game and a hugely popular movie. The film, released during the Lunar New Year holiday at the end of January, earned about 685.7 million yuan, or $111.9 million, making it the biggest documentary of all time in China.

The rise of online and mobile platforms have given Korean content an additional boost in China. “My Love From the Star” and another big series, “The Heirs,” which stars Lee Min-ho, were discovered by the public not through TV but through the Internet and mobile channels.

“We pushed for the online broadcast because getting a time slot on TV requires a complex process,” said an official from HB Entertainment, the production company behind “My Love From the Star.” 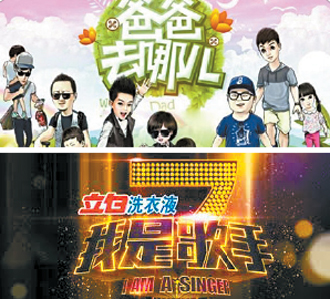 The Chinese versions of Korean variety shows “Dad, Where Are You Going?” (above) which aired on Hunan Satellite TV in 2013, and “I Am a Singer 2,” which is currently being broadcast on the channel.

The popularity of “My Love” was so big that on one episode when the female lead said, “On a snowy day like today, it’s best to have chicken with beer,” the sales of fried chicken around China soared.

The Washington Post even reported on a ludicrous story about one pregnant woman who risked a miscarriage by staying up too many nights watching the drama while eating chicken and drinking beer.

Drama experts also point to the unusual aspects of the series.

“Lee Min-ho and Kim Soo-hyun are all women’s dream-come-true types,” said Kang Hee-jung, a professor of East Asian Studies at Sogang University. Kang also said that Jun Ji-hyun, who plays the lead female character in “My Love From the Star,” “has been showing an image of a liberated woman since her film ‘My Sassy Girl,’ which is much appreciated by Chinese women who are also very assertive.”

The ever-rising popularity of these two male leads - Lee and Kim - can be seen through their accounts on Weibo, a micro-blogging site similar to Twitter. Lee’s followers has surpassed the 20-million mark while Kim just passed five million.

Can China be the next destination for Hallyu?

With Chinese broadcaster Jiangsu Satellite TV paying more than 3 million yuan for Kim Soo-hyun to appear on their reality show “Super Brain,” it certainly looks like a great time for Korean content there. China is by far the biggest market in terms of being able to raise incomparably large funds for celebrity appearances, concerts and other events, according to one Korean production company.

One Guangzhou-based weekly newsletter is planning on visiting the Korea TV & Radio Writers Association shortly to report on how writers for TV and radio programs are trained.

However, some experts are concerned that the prolonged drama fever may trigger a backlash. Last year, the government group that oversees the nation’s television programming prohibited the import of more than one program format into the country per year, greatly limiting future exports from Korea.

In addition, there are still struggles going on over how to distribute the extra revenue that comes from adaptations, like for the mobile game version of “Dad, Where Are You Going?”

“While both maintaining a superior position and fortifying a cooperative relationship, Korea should venture into other sectors where we can have an advantage,” said Lim Dae-geun, a professor of global culture and contents studies at Hankuk University of Foreign Studies.