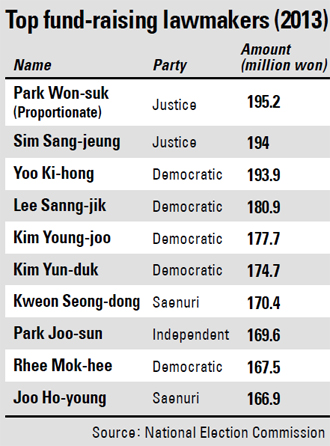 The statistics, which the commission disclosed in accordance with the Political Funds Act, showed that 298 lawmakers accumulated 38.19 billion won ($35.72 million) last year, translating into 128 million won per lawmaker on average. Two lawmakers with no support group, the Saenuri’s Hwang In-ja, and the DP’s Choi Min-hee, were excluded from calculations.

The accumulated funds for 2013 are down by more than 6.7 billion won from a year earlier, when both the general and presidential elections were held. The reduction is largely due to the fact that the yearly donation ceiling for each lawmaker, 150 million won, doubles in years with general, presidential and local elections.

Given that the JP has only five seats, its lawmakers received an average of 160 million won, beyond the limit.

Notable is the fact that the funds UPP lawmakers received shot up, even though the party was embroiled in a political scandal involving Representative Lee Seok-ki, who was convicted in February of conspiring to overthrow the government in the event of a war with North Korea. Lee gathered an average of 144.9 million won last year, almost quadruple the amount in 2012 at 32.43 million won.

The lawmakers who received more donations than allowed totaled 87. They include 38 from the Saenuri, 42 from the DP, and two and three from the UPP and JP. Two independent lawmakers were also a part of that figure.

Should their act of accepting excessive donations turn out to be “intentional” after a probe by the election commission, the state-run body may impose legal restrictions, including pressing charges against them.

“Since fund-raising is mostly done through credit card and account transfers, some lawmakers had the fund excel the ceiling without their knowing,” said an election commission official. “If the excess turns out to be intentional, the lawmakers may be accused, but if the situation is deemed inevitable, the excess amount may be slashed from the total amount for the following year.”