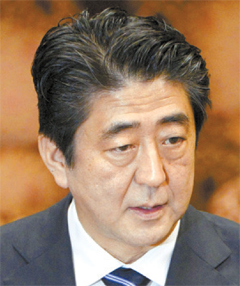 Japanese Prime Minister Shinzo Abe yesterday completely reversed his stance on the Kono Statement, an admission in 1993 by the then-chief cabinet secretary that the Japanese military forced Korean women into sex slavery during World War II.

“The Abe cabinet upholds the position on the recognition of history outlined by the previous administrations in its entirety,” Abe said in the Japanese Diet yesterday.

The reversal came four days after Yoshihide Suga, Abe’s chief cabinet secretary and top government spokesman, said in a press conference that Japan is “not thinking about changing the Kono Statement.”

Since he was inaugurated in December 2012, Abe has said he wanted to replace the Kono Statement with a new position of his own. In February, Abe indicated his government would launch a team of experts to “re-examine” the statement in which Chief-Cabinet Secretary Yohei Kono acknowledged “the role of military authorities” in the forcing of thousands of women, including many Koreans, into sexual servitude.

But during the speech yesterday, Abe also complained that historical issues should be handled by experts and not made into political or diplomatic disputes - repeating a common pattern of contradictory messages on sensitive topics.

Analysts believe Abe’s volte-face on the Kono Statement is a result of pressure from the United States to improve ties with Seoul.

A senior member of the U.S. Embassy in Tokyo, according to diplomatic sources, recently delivered the message to Abe that any “re-examination” of the Kono Statement “is not desirable” and that publication of such a reassessment would “further aggravate Korea-Japan relations.”

The U.S. official also warned that a U.S.-Japan summit meeting slated for April could be focused on Japan’s inflammatory approach to such historical issues as the comfort women and territorial disputes.

In a related move, Tokyo again proposed Wednesday a summit between Abe and President Park Geun-hye in an attempt to thaw a yearlong diplomatic deep freeze between the two countries. Seoul rejected several similar offers before, citing Abe’s intransigence about Japan’s violent history and territorial disputes.

Abe’s remarks yesterday do not appear to immediately brighten the prospect of a summit with President Park. Analysts speculated that Abe wanted it to take place on the sidelines of the Nuclear Security Summit at The Hague on March 24 and 25.

“We still doubt Japan will remain consistent with the stance it has recently come up with,” said a Blue House official yesterday. “Just because [Abe] has made such comments doesn’t necessarily mean Japan has entirely changed its attitude. We need to watch with prudence for a while.”