How market tops get made

How market tops get made 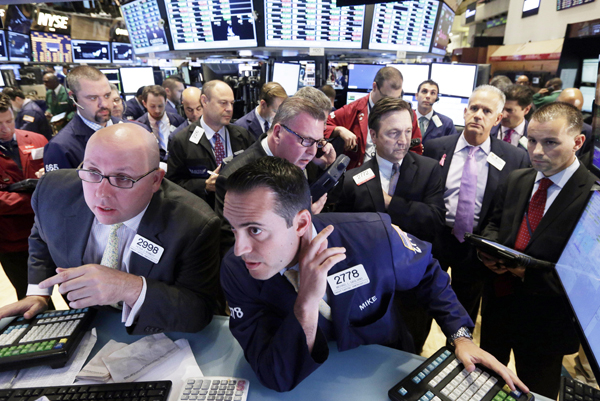 Specialists Peter Kennedy and Michael Gagliano, foreground left and right, work at their posts on the floor of the New York Stock Exchange, Thursday, Oct. 10, 2013. Stocks are rising sharply in early trading on Wall Street following hopeful signs that a budget impasse in Washington may break soon. [AP/NEWSIS]

With all the bubble chatter and talks of over-valued stock markets, I thought it was time to have a discussion with someone expert on the subject. In this case, that person would be Paul Desmond, chief strategist and president of Lowry’s Research.

Desmond has spent the past five decades analyzing markets; his research is widely regarded as both unique and insightful, winning numerous awards from various technicians’ groups. What I really love about his work is how empirically driven it is.

I spoke with him recently, chatting about his work in identifying market tops. Rather than focus on the usual noise, Desmond suggests anyone concerned about a top should be watching for very specific warning signs. He notes the health of a bull market can be observed by watching internal indicators that provide insight into the overall appetite for equity accumulation.

New 52-week highs are the earliest indication of a market that might be turning unhealthy. Look for divergences between index-price highs and new 52-week highs.

When a major index such as the S&P 500 is making new highs but the number of SPX stocks making 52-week peaks begins declining, that divergence is a significant warning sign. Desmond notes that this can warn of an eventual top as much as a year ahead of time.

The next warning signal is the divergences between the advance/decline line and the broader markets. This often turns south six to eight months ahead of major tops.

Desmond emphasizes that both the new 52-week highs and advanced/decline line reveal market breadth - a term that describes how much of the market is participating in the advance. When tops occur, we see extreme selectivity - fewer and fewer stocks are pulling the market upward.

We saw a classic example in the “Nifty Fifty” during the 1960s, and again in the dot-com bubble with a handful of leading stocks driving the Nasdaq.

The third factor is selectivity by market capitalization size. Desmond has observed that, historically, the first group to roll over is the small caps. The bottom 50 percent of the market by cap size will begin to falter first, while the rest of the market appears healthy. The usual time period is eight months prior to a top for the smaller issues to fade.

The mid-caps - the next 35 percent or so of equities - will falter four to six months before the high. The tendency for big-cap-dominated indices to peak last is a function of their structure. They are market-cap weighted and therefore can be dominated by a handful of mega-caps.

The fourth and last factor worth watching is the percentage of stocks in a bear market.

As a rough estimate, any equity down 20 percent from recent highs can be considered in its own bear market. During healthy bull markets, less than 10 percent of stocks are in this condition. As the small caps and mid-caps roll over, this percentage will increase.

At the market peak, we typically see one-fifth of stocks in their own bear market.

What does all this mean for the current run? According to Lowry’s, “the weight of evidence continues to suggest a healthy primary up-trend with no end in sight.” For those concerned with a market top, that is rather bullish.

A few caveats about Desmond’s studies: Although he is rigorous and empirically driven, these data points all come from past market behavior. There are no guarantees that in the future, markets - that means you, Humans - will continue to operate the same way. Perhaps the changing structure of markets might impact market internals. Maybe the rise of ETFs will have an impact. Regardless, there are no guarantees the bull will continue.

However, based on the data Desmond follows, he makes a fairly convincing case that this bull market still has a ways to go before it tops out.

*The author is a Bloomberg View columnist writing about finance, the economy and the business world.