On the day Ahn Hyun-soo, now Viktor Ahn of Russia, won his sixth overall title at the world short track speed skating championships, his former teacher Jeon Myung-gyu, who hasbeen considered the “godfather” of Korean skating for the past two decades, resigned as a vice chairman of the Korean Skating Union.

Jeon was the target of public criticism during the 2014 Sochi Winter Olympics, blamed for Ahn bolting to Russia and the skating union’s internal power struggles.

At a press briefing yesterday, the union said Jeon resigned to take responsibility for Korea’s poor performance at Sochi. The nation won five medals in short track events, all by women. It was the first time the men’s team won no medals since the 2002 Salt Lake City Winter Games. The union also said an internal process to reform the organization has begun.

It added that a new committee to improve Korean skating, consisting of 11 experts from skating, media and legal circles, had its first meeting March 11. At the meeting, an agenda was drawn up to reform the skating union and improve the national team member selection system.

The union said the committee will announce the plan April 4.

“Members of the skating union leadership, including the union chairman Kim Jae-yeol, gave the committee the authority to decide whether they should be replaced as part of the reform,” said a spokesman for the union. “The union decided to reform itself not only because it wants to resolve every negative issue, but to prepare for the 2018 Pyeongchang Winter Olympics.” 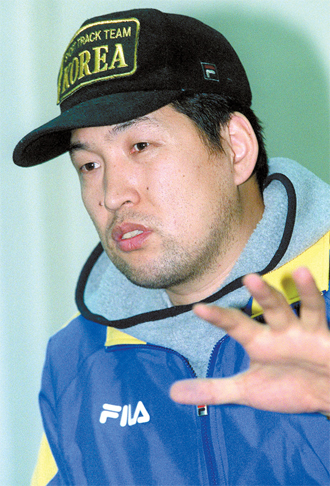 When Korea men struggled as Ahn won three gold medals during the Sochi Games, the public was outraged at the union for losing one of the country’s best skaters ever.

Ahn Ki-won, father of Viktor, accused Jeon of using his position in the union to prevent Ahn from skating in Korea when their relationship soured.

The power struggles were rooted in fierce university loyalties between rival factions in short track that began in the 1990s when Jeon became the short track team’s coach.

Jeon often ordered skaters who had not attended Korea National Sport University to protect KNSU graduate skaters during races. During Jeon’s time as coach from 1987-2002, Korea claimed more than 700 medals in international events.

The Korean men’s struggles continued over the weekend at the 2014 International Skating Union Short Track Speed Skating Championships held in Montreal, Canada. They failed to win a gold medal as Ahn claimed his sixth overall title in the ISU championship by winning gold in the 1,000-meter race and bronze in the 3,000-meter Super Final. It was Ahn’s first overall title in seven years.

In the women’s 3,000-meter Super Final, the 17-year-old who has won three medals - including a gold in the 3,000-meter relays in the Sochi Winter Olympics - claimed gold by crossing the finish line first with a time of 4:50.82. It was her third gold after winning the 1,000-meter final earlier the day and the 1,500-meter final on Saturday.

Going into the 3,000-meter Super Final, Shim was co-leader with Park Seung-hi in the overall standings with a cumulative earned score of 68 points.

Shim added 34 points by winning the 3,000-meter Super Final and finished with 102 points.

Skaters earn points in accordance with the results of each event and the overall title goes to the athlete with the highest total. The 3,000-meter Super Final is an event limited to the eight skaters who earned the most points in the 500-meter, 1,000-meter and 1,500-meter races.

Park, who won the 500-meter event on Saturday, was in second place in the overall title standings with 73 points by adding five points with a fifth-place finish in the 3,000-meter final race.

Another Korean skater, Kim A-lang, ended the championships in sixth place with total earned points of 24 after adding three points by finishing sixth in the 3,000-meter event.