A smile of satisfaction

A smile of satisfaction 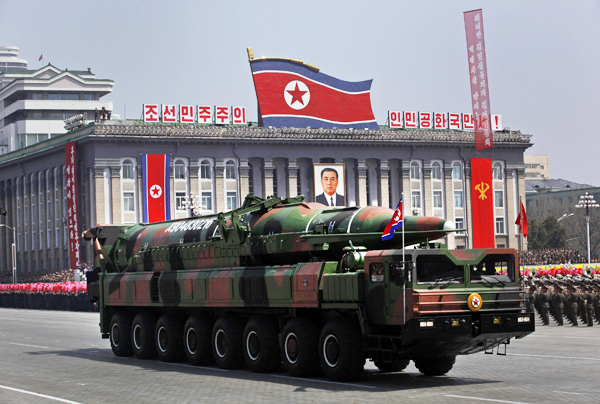 A North Korean vehicle carrying what appears to be a new long-range missile passes at a military parade in 2012. [AP/NEWSIS]

As a journalist, I have conducted two interviews with John Mearsheimer, a professor at the University of Chicago and an international politics authority who continues the legacy of Hans Morgenthau. In those interviews, Mearsheimer emphasized two things. First, we need to face reality and look at the world as it is, not as we want it to be. He advised that there is no place for wishful thinking when analyzing international politics. Second, empathy is a crucial value. Putting yourself in others’ shoes often provides a fresh perspective. The interviews showed his convention-breaking ideas, which have also been reflected in his recent writing.

In a recent op-ed in The New York Times, Mearsheimer pointed out that Washington’s direct response to Russia was a “big mistake.” President Barack Obama approached Russia’s geopolitical interests in legal terms, and it was a policy mistake that neglected the reality of international politics. Russian President Vladimir Putin has been left with no choice but to play hardball. Rather than responding directly to Putin’s hardball, it would have been wiser to acknowledge Russia’s strategic interests in Ukraine and keep Ukraine as a “sovereign buffer state” between Russia and NATO. His argument is far from the rhetoric of justification that often emerges at a time of crisis.

Notably, he mentioned Ukraine’s nuclear issue. Russia “could invade eastern Ukraine or annex Crimea because Ukraine regrettably relinquished its nuclear arsenal it inherited after the Soviet Union broke up, and thus has no counter to Russia’s conventional superiority.” It sounds like Ukraine wouldn’t have been so cornered by Putin’s armed threat if it hadn’t given up its nuclear capacity.

When Ukraine got independence from the former Soviet Union in 1991, about 1,000 nuclear warheads, including 176 ICBM-grade strategic nuclear missiles, were in Ukraine. Aside from four nuclear reactors that were shut down after the Chernobyl nuclear disaster in 1986, Ukraine had a solid nuclear capacity with 12 reactors. Considering the tremendous damage from the unprecedented nuclear catastrophe and the facility and manpower it possessed, Ukraine could have claimed a right to possess nuclear weapons. However, Ukraine felt pressured and chose to abandon that strategy, joining the Nuclear Non-Proliferation Treaty in return for safety guarantees from the five nuclear powers.

In the Budapest Memorandum on Security Assurance in 1994, the five nuclear powers said they respected Ukraine’s territorial integrity and sovereignty, and would abstain from the use or threat of force and political intervention through economic pressure against Ukraine. All nuclear munitions delivery means were moved to Russia by train. However, the latest crisis revealed that the Budapest Memorandum was not an international treaty but mere political promises.

Professor Mearsheimer said in the 2011 interview that if he were a security adviser to Kim Jong-il, he would advise him never to give up his nuclear program. In the realist offense theory, nuclear possession is an obvious choice. Glyn Ford, a former member of the European Parliament, visited North and South Korea more than 30 times, and in a recent interview he said that the simultaneous pursuit of nuclear armament and economic development was a reasonable choice from Pyongyang’s perspective. North Korea must have realized the true power of a nuclear program from the latest turmoil in Ukraine.

As no visible solution is available for the North Korean nuclear issue, Seoul and Washington increasingly believe that a sudden change or reunification is the only way the situation will be resolved. The “unification jackpot” may be an expression of frustration toward the nuclear program. However, Professor Mearsheimer thinks regime change or reunification by absorption is nothing but wishful thinking. China would never agree.

Even at this moment, North Korea’s nuclear activity progresses. North Korea’s National Defense Commission threatened in a statement on March 14 that it could make additional moves to show off the power of nuclear deterrence. Pyongyang may have a fourth nuclear test or long-range missile launch in mind. North Korea currently has single-digit nuclear warheads. But when the arsenal grows to double digits, the nuclear equation will change completely. What if North Korea some day says it possesses 50 or 60 nuclear warheads? In order to avoid that nightmare scenario, we need to make a deal to freeze North Korea’s nuclear activity at its current level. It has been revealed that “strategic patience” is no solution. North Korea may be enjoying a smile of satisfaction over the Ukraine crisis.