Ahn, DP at odds over North Korea policy for party

Ahn, DP at odds over North Korea policy for party 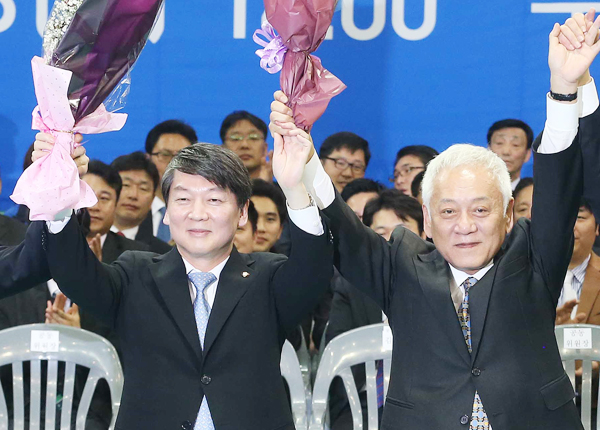 The merger between the opposition Democratic Party and followers of first-term lawmaker Ahn Cheol-soo progressed to the point of agreeing on a name for a new party Sunday, which can be roughly translated as the New Political Democratic United Party.

But signs of internal strains between the two camps on policy issues are already showing.

One of the toughest nuts for the two sides to crack is policy on inter-Korean relations, which many DP insiders consider a defining issue for the party.

The party, which commands the loyalty of 126 lawmakers, is a descendent of the parties of the Kim Dae-jung and Roh Moo-hyun administrations, both of which carried out the so-called Sunshine Policy of aiding and engaging North Korea. Prominent figures in the largest opposition party insist on maintaining a North-friendly policy.

But software mogul-turned-lawmaker Ahn has made a series of remarks hinting he will pursue a harder stance on the North and put national security issues at the forefront of the new party’s principles.

In the past, national security has been a rallying cry of the ruling Saenuri Party.

“While I am against McCarthyism, I will not join forces with those who deny the legitimacy of the Republic of Korea,” said Ahn, who unsuccessfully ran for president in 2012, at a convention of founding delegates of the merged party Sunday.

Ahn said he would agree to sending aid to the North on the condition that it is distributed in a transparent way to reach those in need - a demand not normally made by the DP.

A sign of internal division surfaced Monday at the National Assembly when Representative Byun Jae-ill, a DP member helping to write the new party’s policy platform, said that a 17-page proposal by Ahn’s camp contained content that was “contradictory to the Kim Dae-jung government’s Sunshine Policy.”

In the DP’s policy principles, unification is the No. 1 policy priority followed by diplomacy and then national security.

“Ahn has always considered national security as the foremost task,” said Park Won-am, an economics professor at Hongik University and a member of Ahn’s camp who is involved in discussions on policy principles for the future.

The Democrats showed signs of yielding to Ahn’s sensibilities yesterday. The two sides said the new party’s policy platform will not advocate embracing the spirits of the two inter-Korea summits held in 2000 and 2007 in Pyongyang. The first was led by President Kim Dae-jung and North Korean leader Kim Jong-il, while the second was attended by President Roh Moo-hyun. It remains to be seen whether the DP’s members will go along with such changes in principles, especially members who served under the Roh administration who form a significant faction in the DP.

“We might try to sabotage the whole process [of creating a new party] if it produces a platform and principles that deny the very identity of the DP,” said a two-term lawmaker in the pro-Roh faction inside the DP. The lawmaker spoke on the condition of anonymity.