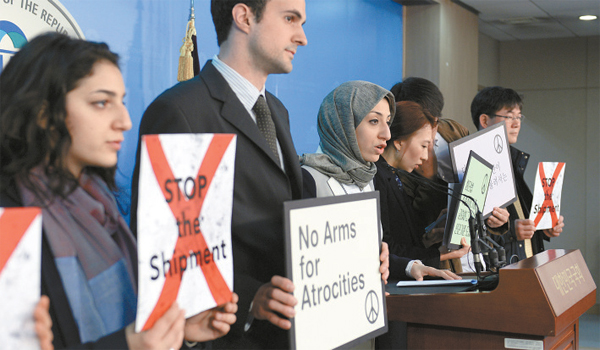 Bill Marczak, second from left, co-founder of the human rights group Bahrain Watch, attends a press conference yesterday at the National Assembly accompanied by Representative Kim Hyun of the Democratic Party at which they urged Korea to permanently stop exporting tear gas canisters to Bahrain. [NEWS1]

A human rights group from Bahrain held an unusual press briefing yesterday at the National Assembly, urging the Korean government to permanently stop the export of tear gas canisters to their Gulf island nation, claiming Korea’s chemicals are responsible for at least 39 deaths in the country’s three-year pro-democracy movement.

Wearing a traditional hijab, Ala’a Shehabi, an activist of Bahrain Watch, a human rights group that monitors the use of brutal force by the Bahraini regime, said tear gas has “killed nearly 40 people and injured hundreds.”

“We are fighting for a democratic state, but we are faced with Korean tear gas every day. … Korea needs a new arms policy in line with other countries that prevents the exports of arms to countries that suppress their citizens.”

Tear gas contains at least 15 toxic chemical irritants that bring pain to respiratory organs and eyes. Tear gas was used for years by Korean dictatorships to suppress the local pro-democracy movement. It is now banned for use in Korea but is exported.

Yesterday’s press conference was part of an ongoing campaign called “Stop the Shipment” by Bahrain Watch, Amnesty International Korea and other civic groups to urge the Korean government to place a permanent ban on selling the chemical substance to the Gulf nation of 1.3 million, which has been roiled by periodic civic unrest since February 2011. Representative Kim Hyun of the Democratic Party co-sponsored the conference yesterday.

“We should work to produce legislation that bans the export of tear gas canisters to nations that brutally suppress their citizens without justification,” said the lawmaker.

The activist alleged that 90 percent of the tear gas canisters fired by the Bahrain authorities in the past four years came from Korea. Bahrain also imports canisters from South Africa and Germany, according to Bahrain Watch.

In making his case, Marczak posed a contrast between the image Korea wants to project from “Gangnam Style” and sleek Samsung mobile phones and its other image as a weapons exporter.

After three months of campaigning by human rights groups against the export of tear gas to the Gulf island nation, the state-run Defense Acquisition Program Administration temporarily suspended exports in January, citing an unstable political situation in Bahrain and requests from civic groups.

At the height of the pro-democracy movement against the military government of Chun Doo Hwan in 1987, Korean authorities fired more than 673,000 tear gas canisters at street protesters.

Since the inauguration of the Kim Dae-jung government in 1998, Korea has forbidden the use of tear gas against its own citizens.