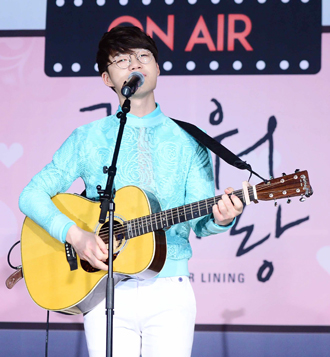 Once a simple busker, Hong Dae-kwang has become a familiar name in Korea’s music industry since appearing on the audition program “Superstar K4” in 2012. Last year, his reputation grew with his official debut mini-album, “Far Away.”

But now the 29-year-old singer, who used to be known for simple, guitar-based songs, has undergone a makeover and is ready to take on a new challenge - dancing to upbeat pop songs.

His new EP, “The Silver Lining Part 2,” which came out today, is a sequel to the mini-album he released in January. Hong held a showcase on Wednesday at the IFC Mall in Yeouido, western Seoul, to present the new release, where he appeared wearing a bright, mint-color outfit. He even performed with a handful of back-up dancers for the album’s lead-off track, “Thank You My Love.”

The song was filled with the romantic and fluttery emotions of a lovebird who has just started dating. The pleasure and gratitude coming from having someone to love and being loved were well described in the lyrics.

“I wanted to show versatility,” said Hong. “A lot of people never expected me to dance and neither did I. But I wanted to show some transformation and, since I had a more solitary style on my first EP, in order to turn that image upside down, I went for dancing.”

Releasing “The Silver Lining” as two mini-albums was done to present two sides of winter - the one that comes at the year’s end and the other one that lingers in the next year. The lead-off track for part one, “No Answer,” was more apt for the dim wintery season as it talked about longing for an ex-lover. But the newest EP is a better choice for the warming spring breeze that is already stirring in the air. 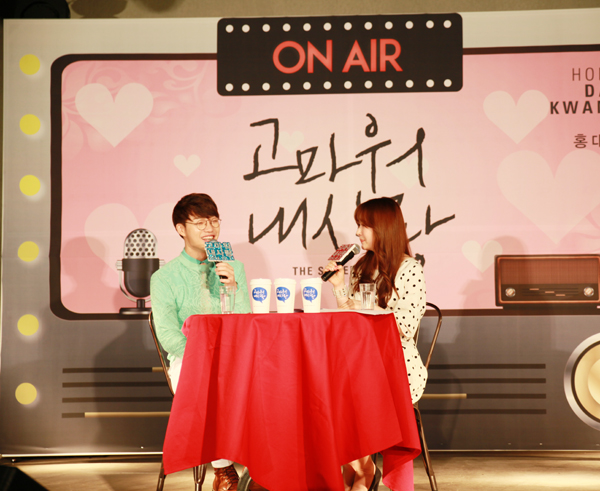 Hong Dae-kwang (left) at a showcase for his new EP at the IFC Mall on Wednesday. The singer MayBee (right) hosted the event. Provided by CJ E&M

When asked which album he prefers, Hong answered that while he could relate more to the sentiments on the first EP, the second one was made with the public and his fans in mind.

“I would like to overturn my image as a ballad singer. I do not know how much more I can change, but I think I’ve done a pretty good job so far.”

Two other tracks on part two are also cheery and optimistic, like the first. “Just for a While,” which was written and composed by Hong, is backed by his guitar and features an easy-to-follow melody. “Happy Birthday to You” is about publicly declaring his love for someone on her birthday. The EP also has an instrumental outro track.

“If I were to score my first EP and the newest one, I would equally distribute 50 points to each, to make 100 points in total,” said Hong confidently.

The two EPs will be released together as a single, full-length CD, too.