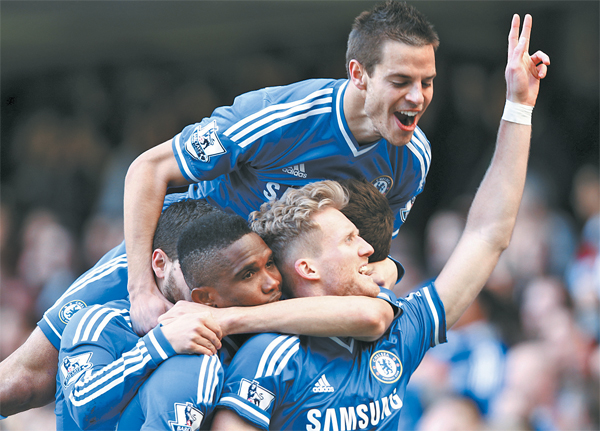 Chelsea handed Arsene Wenger one of his most demoralizing defeats as Arsenal manager as his 1,000th game ended in a 6-0 rout, and the referee also endured embarrassment at Stamford Bridge on Saturday.

Chelsea earned its biggest league victory under Jose Mourinho after the leaders raced into a 2-0 lead in just seven minutes on goals from Samuel Eto’o and Andre Schuerrle.

“You come to kill and in 10 minutes we destroyed,’’ Mourinho said. “After that? Easy.’’

Not for the referee, as Andre Marriner provided the London derby’s big talking point by sending off the wrong Arsenal player after 15 minutes.

Although Alex Oxlade-Chamberlain blatantly handled to keep out Eden Hazard’s shot, it was Kieran Gibbs who was dismissed despite his teammate’s protests.

“Andre is disappointed that he failed to identify the correct player,’’ the league referees’ organization said in a statement. “He expressed his disappointment to Arsenal when he was made aware of the issue.’’

Arsenal saw its title ambitions seriously dented as it fell seven points behind Chelsea, and dropped to fourth.

After the humiliation, Wenger did not attend the mandatory post-match news conference, with Arsenal media chief Mark Gonnella saying the team bus had to leave while Mourinho was addressing reporters.

The Frenchman couldn’t get away quick enough after another gloomy landmark day at Stamford Bridge. His 500th game in charge also saw Arsenal lose at Chelsea, albeit only 1-0 in 2005.

The margin of this defeat matched the previous low point of Wenger’s 18-year reign - an 8-2 loss at Manchester United.

It was also Arsenal’s third big away loss against its direct title rivals this season, following a 6-3 defeat at Manchester City and 5-1 drubbing at Liverpool.

And the humbling only served to justify Mourinho’s recent gibe that Wenger is a “specialist in failure’’ as the Frenchman went an 11th game without beating his Portuguese rival.

Only five minutes after scoring the opening goal in the fifth, Eto’o was forced off injured and replaced by Fernando Torres.

“Arsene Wenger, we want you to stay,’’ Chelsea fans taunted with a quick 2-0 lead.

Then Hazard’s shot was tipped away, not by Arsenal goalkeeper Wojciech Szczesny, but by Oxlade-Chamberlain.

Despite the clearest of diving saves by an outfield player, Marriner somehow managed to identify Gibbs as the offender despite Oxlade-Chamberlain being seen admitting to the referee: “It was me.’’ The one-game suspension is still set to be served by Oxlade-Chamberlain.

Hazard scored from the penalty spot and there was no way back for Arsenal.

Just before halftime, Schuerrle released Torres, who squared into the center for Oscar to scoop in from close range. Oscar’s second in the 66th was in part down to a goalkeeping blunder as Szczesny allowed his curling shot from outside the area to slip through his hands.

Szczesny allowed Salah’s shot to roll under him four minutes later to cap an all-around dismal performance by the visitors.