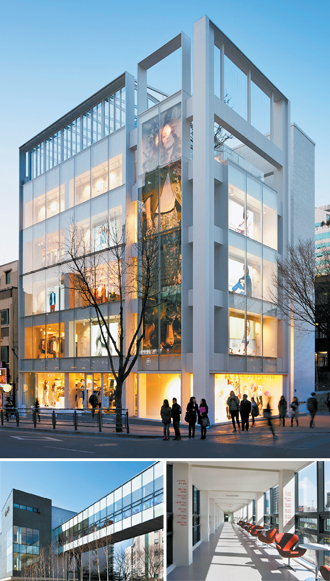 A 44-meter-long (144-foot-long) bridge, just over three meters off the ground, was installed to link the main hospital to the addition. Since then, it has become a popular walkway for patients who stay at the hospital after giving birth. Pictures by Park Young-chae

The last 30 to 40 years in Korea have been marked by the demolition and erection of new buildings, so much so that the country earned the nickname “the new building society.”

But times are changing. Rather than just pulling down old structures, remodeling buildings is now all the rage.

Instead of recycling, call it “upcycling,” and everything - commercial buildings, residential dwellings and public facilities - is being transformed from the old and shabby into the new and sparkly.

Sun Kim and Young Lim, the founders of D Lim Architects, are two pioneers in this field. Renowned for their work on the Ahn Jung-geun Memorial Hall in 2010, the two garnered attention for turning an old supermarket into part of a hospital in 2011.

Over the last three years and five months, the duo has worked on various remodeling projects.

“Until now, we have had no qualms about pulling down a perfectly sound building to build a new one,” they said. “That is a problem.”

Furthermore, they claim that remodeling is not only a better choice economically but also an environmentally friendlier option. The representatives of D Lim said that rather than building new structures, society needs to choose remodeling.

The reason that the two became pioneers of this philosophy was chance. Although from an architect’s point of view it may be easier to just start from scratch, the pair was drawn by the challenge of transforming existing structures.

“It’s true that it’s more work,” said Lim. “There are more restrictions and the process needs to be more thorough. But to find potential in a building that was on the brink of destruction is not only interesting but immensely rewarding.” 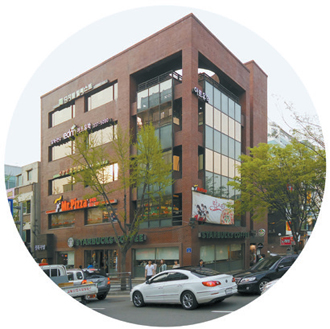 A 30-year-old red brick building in Hongdae had a contemporary makeover, complete with a glass facade that looks as if long threads were suspended from above.

The duo’s first remodeling project was the Shesmedi Hospital in Suwon, which was looking to expand and wanted to demolish a large, old supermarket next door.

Rather than just tearing it down, though, the duo reworked it. While it took some time for them to get a fresh take on the building, it wasn’t long before they started to see the possibilities. Because the columns were far apart and the ceiling stood at 4.5-meters (14-feet-9-inches) tall, it was perfect for a hospital, which requires a lot of overhead space for equipment.

As a result, instead of tearing down the grocery store, they turned it into a ward with operating and consultation rooms.

The revamped building was then joined to the main hospital by a bridge that was 3.4-meters high and became a symbolic part of the hospital. The bridge connecting the buildings is about 44 meters long, and it became a popular walking trail for new moms and relatives of patients staying at the hospital.

And so an old building was turned into a popular hangout in the complex.

Their next project was turning a warehouse in Doksan-dong, southwest Seoul, into a building for Stardom Entertainment, a hip-hop music label. While leaving some of the traces of the building’s rough concrete exterior, the pair used steel and glass to evoke a contemporary vibe to fit the company. 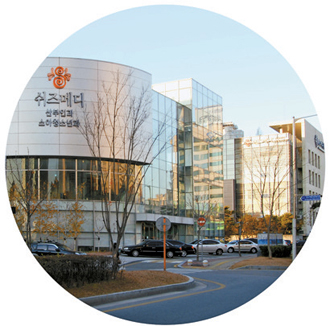 A building that was set to be demolished was turned into a hospital complex by Lim and Kim of D Lim Architects.

Because remodeling means you reuse a lot of the original infrastructure, it is a labor-intensive business.

“Safety concerns are certainly important. So before we decide whether to remodel a building, we work with a structural technician to make sure it’s safe,” said Lim.

Lim and Kim have recently worked on some hip projects.

“We worked on remodeling buildings in Hongdae and Garosu-gil to turn them into H&M shops,” said Kim. “With commercial buildings, it’s important to consider how to portray the brand image while working to create something that’s not too ostentatious and blends in well with the surroundings.”

They have also transformed an old classroom into a playground for an elementary school in Jeonju.

With their expertise in turning the old into new, Lim said that how a building was remodeled will dictate how local economies survive.

“We have a lot of 20- to 40-year-old buildings all around us,” said Lim. “From now on, the longevity of a building will depend more on the interim more than the exterior.”