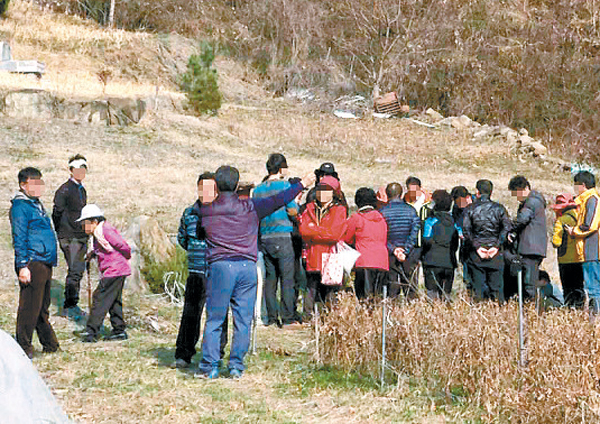 A crowd looks for meteorites on Sunday in Micheon-myeon, Jinju, South Gyeongsang, where the second and third pieces of a meteorite were found. By Song Bong-geun

It’s been two weeks since three chunks of space rock were found in Jinju, South Gyeongsang, but the locals are still in orbit over their fame.

So many space enthusiasts have shown up that the city government is hoping to make itself over as the Roswell of Korea and continue to attract tourists. In the past, there wasn’t much reason for tourists to come to Jinju.

Meanwhile, the national government has promised to set up a task force for meteorite control and research.

According to the Korea Polar Research Institute, a meteorite entered the atmosphere above the capital region on March 9, exploding above Hamyang and Sancheong counties and falling into pieces in and possibly around Jinju. They were the first chondrites, or pieces of a meteorite, to be found in Korea in 71 years.

The first was found in a local greenhouse on March 10th, the second the following day and a third on March 16th. Only the first two have been definitively proclaimed as chondrites.

Strangers are still showing up in remote parts of Jinju, particularly in the areas where the first two rocks were found.

Kim Dae-wu, a 48-year-old visitor from Busan, dug up some of the dirt from the pit where the second rock was found. “I will bring the remaining ‘energy from outer space’ home,” he said.

Some meteorite hunters equipped with rods with magnets at the tip and GPS devices combed the region.

“Every day, we see some people coming into the office to confirm that what we found are meteorites,” says Lee Sun-geum, an official of the Micheon-myeon Office in Jinju.

While stores and restaurants are seeing unusually brisk trade, farmers are worrying that the visitors might get in the way of their work, especially as they start grafting chestnut tree branches around this time of year.

Forest fires by campers are another concern.

The Jinju government said yesterday that it is planning a tour route that connects the three spots where the chondrite rocks were found, and linking it to pterosaurs fossils and dinosaur footprint sites in the city.

It wants to model itself after Roswell, New Mexico in the United States, where a U.F.O. allegedly crashed in 1947, the inspiration for the grounded U.F.O. in the Hollywood blockbuster “Independence Day.”

The Jinju government said it will gather opinions of its residents as to whether to transform itself into a “meteorite city.”

Meanwhile, the central government has decided to create a task force to set up a national meteorite control system.

The task force, led by the Ministry of Science, ICT and Future Planning, will be made up of personnel from various governmental research institutes.

It is expected to be in charge of meteorite verification and a registration system for natural and outer space materials.

“We will finalize the basic measures against outer space threats within the first half of this year, reflecting overall meteorite control measures from the task force,” said an official of the Science, ICT and Future Planning Ministry.