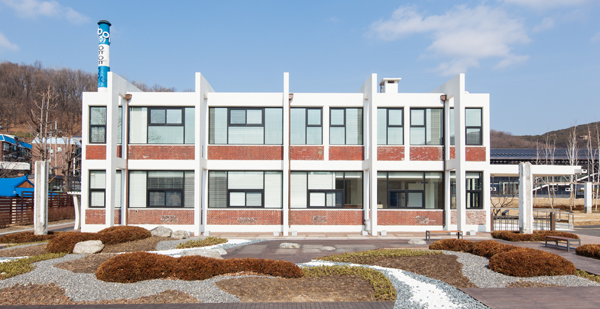 When most people think of Anyang, it usually calls to mind a modest industrial town to the southwest of Seoul. But now, several derelict buildings in the heart of the city that once served as factories in the 1950s have been resurrected as the home of public art pieces and historical artifacts for the fourth edition of the Anyang Public Art Project (APAP), which opens to the public on Friday.

The six main buildings on the 16,243-square-meter (four-acre) site near the entrance of Anyang Art Park in Suksu-dong have been transformed - changed from dilapidated, rusted frames into sleek, minimalist exhibition halls.

Founded in 2005 and held irregularly since then, the APAP exhibition this year tried a new way to present public art, taking a slow and retrospective approach.

“The major topic of the fourth APAP is looking back on what we have accomplished over the past 10 years and figuring out how to preserve it and fix its flaws,” said Beck Jee-sook, the artistic director of this year’s APAP, at a press conference on Monday. “Rather than introducing a vast amount of new art pieces here and there, we focused on how to reuse the exiting artworks and add a new story to them.” 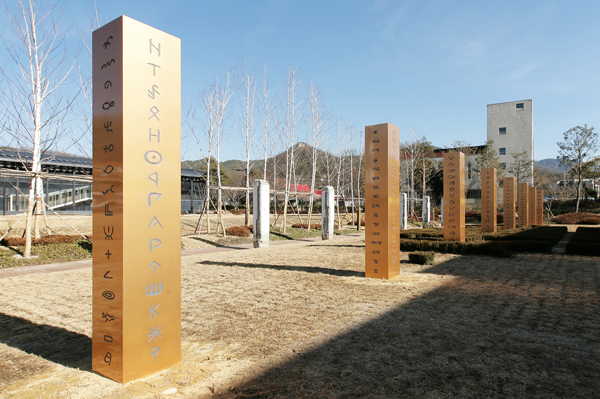 “The Garden of Disappearing Letters” by Bae Young-whan

As part of that theme of reusing, the Kim Chung Up Museum is definitely the center of the exhibition. The building used to be a factory for the Yuyu Industrial Company, but now is the home of some 100 of the most important sketches, floor plans and handwritten notes by the late architect Kim Chung-up (1922-88), who is considered a pioneer of modern architecture in Korea.

The plant, which was made by Kim back in 1959, was renovated with an eye on preserving the building’s original design. The height of the doors remains low and a set of pillars still stand in the middle of the room, seemingly for no reason.

The Pyongyang-born Kim is famous for creating the French Embassy in Korea (France even gave him the “chevalier” medal) and the main buildings at Sogang and Konkuk universities, among many others.

APAP is also presenting 24 pillars from the original Yuyu factory in a vacant lot nearby, in Bae Young-whan’s exhibition “The Garden of Disappearing Letters.” Six of the pillars in the center are painted gold and covered with ancient characters that are no longer used today.

The Eoulmadang building located next to the museum used to be a boiler room for the factory, but today its giant chimney is decorated with paintings of Korean consonants, representing terms that symbolize the project and the city. 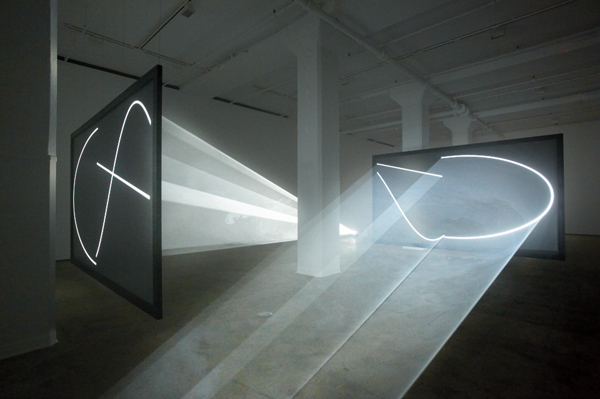 “Face to Face,” by Anthony McCall Provided by APAP

“The chimney stands as a public artwork to represent not only the project but also what this venue is and its past,” said Shim Hye-hwa, APAP’s director of communications.

However, if one wants to enjoy a more relaxed and stimulating display, Anyang Pavilion, a multicultural complex located a five-minute walk from the APAP center, is a good choice. In the venue, designed by Portuguese architect Alvaro Siza that opened last October, people can attend art workshops, access an offline archive and read from the collection of some 2,000 public-art-related books.

*The exhibition runs until June 8. Admission is free for the permanent exhibitions at the Kim Chung Up Museum and Anyangsaji Hall, but the special exhibitions may require an extra fee.