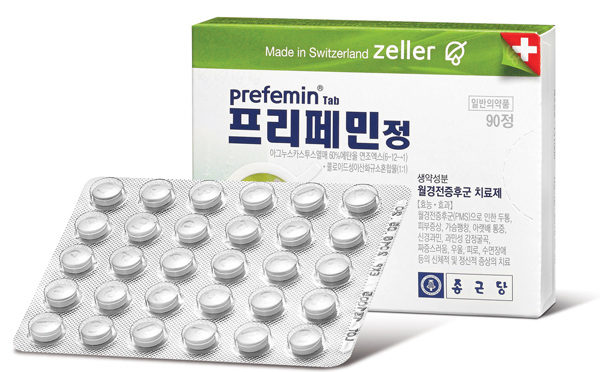 A 25-year-old woman surnamed Kim takes one or two pain pills a month for premenstrual discomfort.

“Before I start my period, I feel very tired, have skin problems and a stomachache,” said Kim. “I would take anything if it makes me feel better and healthier.”

For other women like Kim who are looking for some “magical” solution to help them feel better before menstruation, Chong Kun Dang, a local pharmaceutical company, started importing and selling the country’s first herbal remedy - called Prefemin - for premenstrual syndrome in October.

Prefemin is produced by Zeller, a Switzerland-based pharmaceutical company, and has been approved by the European Medicines Agency.

“There are many premenstrual syndrome symptoms like constipation, diarrhea and skin troubles, as well as emotional ones like depression,” said a marketing official at Chong Kun Dang. “But painkillers only tend to relieve physical pain for a short time.

“Prefemin on the other hand is a treatment for both physical and emotional symptoms such as drowsiness and sleeping disorders.”

According to Chong Kun Dang, the main ingredient of the herbal medicine comes from agnus castus fruit extract.

“Normally, Korean women would feel it is a physiological phenomenon for them to feel pain before they start their period,” the official said. “But it can be treated. It’s just that the right pill hasn’t been introduced to them yet.”

The pharmaceutical company noted that premenstrual syndrome is very common, affecting about four in 10 women of childbearing age.

“Many women are not aware that premenstrual syndrome is a sickness that needs to be treated,” said another official from Chong Kun Dang. “They rarely take in treatments.”

Prefemin is available at pharmacies.