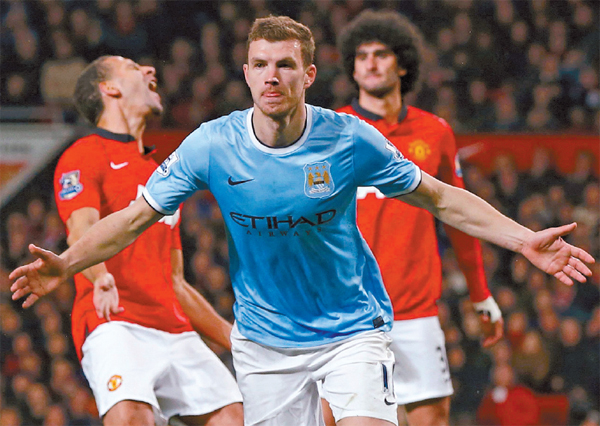 A clinical double from Edin Dzeko helped Manchester City move into second in the Premier League with a 3-0 win at Manchester United on Tuesday, while Arsenal’s title hopes all but evaporated in a 2-2 draw with Swansea City.

Manchester City took the lead after 43 seconds at Old Trafford and never looked back, exposing United’s soft center almost at will with Dzeko and Yaya Toure netting in the second half to inflict another painful defeat on home boss David Moyes.

City, in ominous form after a 5-0 win over Fulham on Saturday, moved into the slipstream of Chelsea and are three points behind the league leaders with two games in hand.

“It was an amazing game from the first to the last minute,” striker Dzeko said on Sky Sports.

“We wanted to start playing our game early, to press high and get an early goal, which we did.

“After that it was all about us. We could have had another goal [in the first 10 minutes], but we scored two more in the second half.”

Arsenal manager Arsene Wenger was, like United’s Moyes, facing difficult questions after his side conceded a 90th-minute own goal from Mathieu Flamini to draw with struggling visitors Swansea on the back of a 6-0 thrashing by London rivals Chelsea.

It looked like Arsenal would claim all three points when second-half goals within a minute from Lukas Podolski and Olivier Giroud canceled out Wilfried Bony’s opener.

Everton made it four wins in a row to maintain their own push for Europe as they beat Newcastle United, 3-0, away with England hopeful Ross Barkley, Belgium striker Romelu Lukaku and Leon Osman all on target.

Arsenal stayed fourth on 63 points, two behind third-placed Liverpool, which hosts Sunderland on Wednesday. Everton is up a place to fifth, six points behind Arsenal with a game in hand in the race for a top-four finish and Champions League football.

Manchester United should have approached the night buoyed by back-to-back wins, but instead began like a rabbit caught in the headlights of City’s breathtaking early onslaught.

The second hand was still on its first lap of the clock when City took the lead, with Dzeko finishing into an open goal after a Samir Nasri shot hit the post.

United was in disarray as City, which has won five of its past six matches, continued to pile forward, with David Silva finding pockets of space in between the hosts’ midfield and backline to weave his magic and keep United chasing shadows.

United could not stem the flow of City’s attacks and Dzeko’s second 11 minutes after halftime put the match to bed, with the Bosnian easily shaking off his marker Rio Ferdinand to steer a corner from the right in at the near post.

The coup de grace was administered by Toure in stoppage time when he drilled a low shot into the bottom corner.

“I think we have played a very good side, playing at the sort of level we are aspiring to,” Moyes said after his second straight 3-0 home league loss following a defeat by Liverpool.

“We need to come up a couple of levels ourselves because at the moment we are not there.”

After the embarrassment of Saturday’s thrashing by Chelsea, the onus was on Arsenal to show it was still in the title race and not going to be dragged into a dogfight for a top-four finish.

While the north London side struggled against their top-four rivals, they have proved more than capable of dispatching the league’s lesser lights.

Swansea, however, was up for a scrap and smelled blood, taking the lead after 11 minutes when Bony directed a precise header into the net for his 11th league goal of the season.