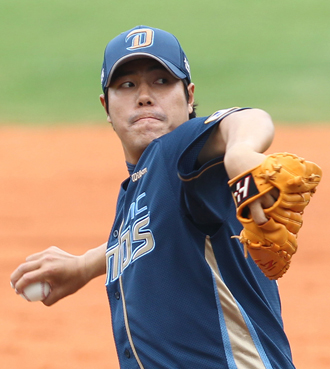 After a hot stove season in which the Korea Baseball Organization’s nine teams spent a record 53.2 billion won ($49.6 million), excitement is building for the start of the 2014 regular season on Saturday. Today, the Pickoffs previews the NC Dinos and their chances of making the postseason for the first time in their second KBO season.

Since this will be the last year the Dinos can have four foreign players - an advantage enjoyed by the KBO expansion team for two years to allow it to develop a competitive roster - the Dinos opened their wallet during the offseason.

They also re-signed starters Charlie Shirek and Eric Hacker, and replaced Adam Wilk with Thad Weber. After being released from the team, Wilk said he had always been prepared to leave Korea because of Pyongyang’s military provocations, an assertion that many found laughable.

Last year, the Dinos’ biggest problems were hitting, defense and the bullpen, and the addition of Thames and former gold glove winners Lee and Son should be will certainly help.

A big question mark is Lee, the 5 billion won man in center field who will turn 34 during the season, and whether he can perform at the level he has for the past four years after hitting .250 in the preseason. Na (.243 and 14 home runs) needs to improve his average and there is no guarantee the 37-year-old DH Lee can replicate his performance in 2013.

But the team’s bigger offensive problem is the bottom of the order. Third baseman Mo Chang-min (.276 and 12 home runs) and second baseman Park Min-woo (.268 in 32 games) need to produce better numbers.

And while it is difficult to see Son (.264 over nine seasons) hitting more than .270, the Dinos will be happy if the gold-glove shortstop stays healthy and anchors an improved up-the-middle defense along with center fielder Lee. In their debut season last year, the Dinos made 27 errors in 22 games in April to finish the month with four wins, 17 loses and a tie.

The bullpen is another story. The Dinos finished third in the league in the team ERA last year at 3.96, but their starters put up a league-best 3.55 ERA. In games when they had a lead in the seventh inning or later, the Dinos were 43-9-2 for a .827 winning percentage, which was the worst in the league.

Manager Kim has designated 29-year-old right hander Kim Jin-sung (1-2, with 2 saves and a 4.76 ERA) as the closer after he recorded three saves in the preseason and a perfect 0.00 ERA. But if he struggles, there are not many alternatives.

Question marks include the durability of 36-year-old Park and 38-year-old Son, and whether Lee, who went 0-2 with three holds and a15.43 ERA in five preseason games, can improve his control.

It will be fun to watch how this young team competes with a year of experience under its belt. Last season, many young Dinos were playing in front of large crowds for the first time and sometimes showed their lack of experience at crucial junctures. Adding some veterans in key positions - center field and shortstop - should at least prevent a repeat of last year’s April nightmare. But it won’t be enough to get the Dinos to the postseason.