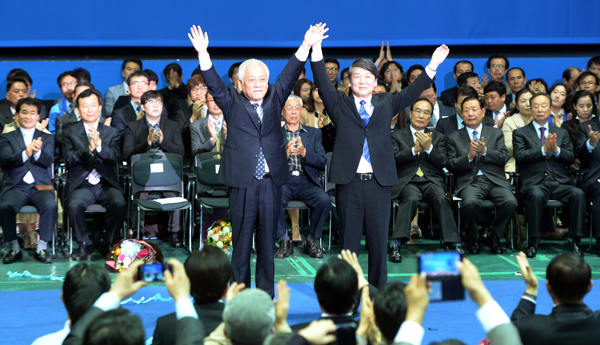 Democrats and supporters of independent lawmaker Ahn Cheol-soo held an inaugural ceremony yesterday to formally launch the New Politics Alliance for Democracy (NPAD), vowing to restore trust in politics and challenge the ruling Saenuri Party in the June local elections.

The merger officially dissolves the Democratic Party, which commanded the loyalty of 126 lawmakers and was a self-proclaimed successor to the liberal Kim Dae-jung and Roh Moo-hyun governments. The unified party’s ultimate aim is to shift the balance of power in 2017.

Speaking at the Olympic Hall in Songpa District, southern Seoul, Ahn proclaimed to an audience made up of his supporters and former Democrats that the fledgling party will strive to be a major oppositional force that will establish a new agenda for the future and replace decades-old vested interests in the political sphere.

“I am here to promise that we are ready to cooperate [with the government] when it comes to enhancing people’s livelihoods and national interests. But we will take a firm stance against [the government] if it tries to bypass the opposition in a unilateral and self-righteous way,” he said.

Kim Han-gill, the former Democratic Party chairman who realized the merger with Ahn, had harsh words for the Park Geun-hye government in his address, claiming the administration has “reneged on multiple campaign promises” for a better welfare system and economic democratization “in blatant disregard of the people.”

“Starting with a victory in the June local elections, let us go forward to achieve a shift in power in 2017,” Kim said before applause from the crowd.

He and Ahn will co-chair the new party until March next year.

The formation of the NPAD is a significant milestone for Ahn, who was elected to the National Assembly less than a year ago and now stands as the a co-leader of the country’s second-largest political entity.

The official launch of the new opposition yesterday comes 24 days after Kim announced that he and the independent lawmaker would form a united opposition party, a decision that surprised the nation and carried the potential to upend the political establishment.

Now, political observers are watching closely to see how Ahn’s faction and the former Democrats will work to share power and create structure in the party, especially with the impending elections.

Of particular interest is what kind of relationship Ahn will forge with Moon Jae-in, who ran as the only presidential candidate for the opposition in 2012 after the independent lawmaker bowed out of the race.

Moon is the de facto leader of a faction comprised of political figures who once served under the Roh government. It appears likely that Ahn and Moon will vie for a presidential bid once again in 2017, which could create tension.

Moon, the former chief of staff in the Roh Blue House, made it clear last year that he plans to run in the next presidential race.

A DP official told reporters on Tuesday that one of the major differences between the new party and the former Democrats is that the NPAD, in its party platform, acknowledges its respect for those who led the rapid economic development under Park Chung Hee and Chun Doo Hwan, and also attributes Korea’s democracy to those who fought against those authoritarian regimes.

“While the DP focused on representing those who helped bring democracy to this country, the new party will also represent those who led this country to economic prosperity [as well as those who fought against military rule],” Byun Jae-il, chairman of the policy platform committee, told reporters on Tuesday at the National Assembly.

To display its strong stance on national security, the NPAD invited two Korean War veterans to the inauguration yesterday. Those who participated in pro-democracy protests were also invited to the event, part of the party’s efforts to demonstrate its commitment to honoring the spirit of Korea’s democratic struggle against its military administrations.

The new party’s official platform also contains policies that indicate its intention to appeal to center-right voters, emphasizing the need to increase national security and keep threats from North Korea in check. The NPAD also stated that it will seek to monitor and improve the human rights situation in the Communist state and see that humanitarian aid sent to the North is distributed in a transparent way.

“We will actively pursue improving the livelihoods and human rights conditions of the North Korean people through inter-Korea cooperation and international cooperation,” the party states in its policy platform.

It adds that it will embrace the spirit of the two joint summit meetings held between the leaders of the two Koreas in Pyongyang in 2000 and 2007, as well as principles of the July 4 South-North Joint Statement and the Inter-Korean Basic Agreement, signed by the Park Chung Hee and Roh governments.