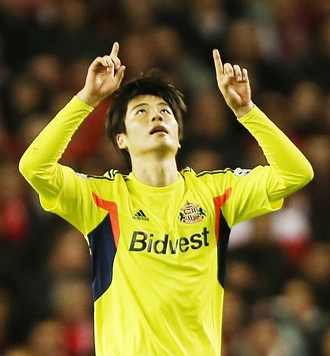 Ki Sung-yueng of Sunderland celebrates after scoring a goal against Liverpool at Anfield in England on Wednesday. [REUTERS/NEWS1]

Korean players in European leagues had not scored a goal in a while. Now they’ve put two in the net.

Stefan Kiessling slotted in his 13th goal of the campaign after 11 minutes before Tobias Werner levelled for the battling hosts on the hour.

Son struck against the run of play with Leverkusen’s first chance of the second half to reclaim the lead in the 80th minute before Emre Can gave them a two-goal cushion to cut the gap with third-placed Schalke 04 to four points with Leverkusen fourth on 47.

“It is kind of a strange feeling with our last win so long ago,” said Leverkusen goalkeeper Bernd Leno. “We had a lot of games like this in the first half of the season where we were not the best team, but still won.”

The win, however, was a big relief for Coach Sami Hyypia, who was under mounting pressure after five defeats in their previous six league games.

“My players did it very well,” Hyypia said. “We fought very hard tonight.”

Borussia Moenchengladbach’s hopes of a top-four finish and a chance to play in the Champions League were hit when they slumped to a 1-0 defeat at Eintracht Frankfurt to remain sixth on 42.

At the other end of the table, Nuremberg’s Swiss international Josip Drmic struck twice to take his goal tally to 15 and help his team beat VfB Stuttgart, 2-0, to move up to the 14th spot on 26, with their opponents tumbling to 17th place on 24.

Hamburg SV remained in the relegation playoff spot after their 1-1 draw against Freiburg as they battle to avoid their first relegation since the Bundesliga began in 1963.

Separately, Ki scored his third goal of the season against Liverpool, but it wasn’t good enough to give three points to Sunderland, which is struggling to survive in the English Premier League. Liverpool stayed firmly in the hunt for a first league title in 24 years as superb strikes from Steven Gerrard and Daniel Sturridge fired them to a 2-1 win over an obdurate Sunderland side at Anfield on Wednesday.

The Merseyside club’s seventh successive Premier League victory, achieved without the swaggering attacking play that has lit up recent performances, moved it back ahead of Manchester City into second place, one point behind Chelsea.

After struggling to get into their stride against a stubborn Sunderland rearguard, a powerful Gerrard free kick and a curled effort from Sturridge earned Liverpool a two-goal advantage before Ki pulled one back 14 minutes from time to ensure a nervy end to the game.

“You have to give credit to Sunderland, they have come to make it difficult for us, they were difficult to break down,” Liverpool captain Gerrard told Sky Sports.

“We need to learn that when we go two goals ahead we can’t concede. We need to hold on and pass it better.”

The east London club suffered the ignominy of being booed despite taking all three points, heightening the tension between manager Sam Allardyce and the Upton Park crowd.