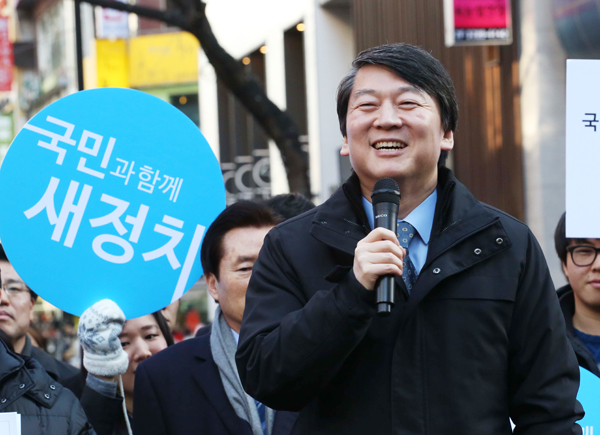 Ahn Cheol-soo, former independent lawmaker and now co-chairman of the New Politics Alliance for Democracy, said before the merger with the main opposition Democratic Party that if he worked hard to do what the people want, his promise for what he calls “politics together with people” would be realized. [JoongAng Ilbo]

Do you ever feel patronized by advertising? I often do, and in particular find myself annoyed by trite slogans that have no relationship with the product in question. “Just Do It”? Just do what, exactly? “Never Stop Exploring” - sound advice maybe, but you still haven’t told me why I need your expensive jacket.

Such language is intended to provoke within us a positive emotional response, which we will then hopefully ascribe to the product or brand being advertised. The use of vague but emotive words is, sadly, much more effective than telling us directly why the jacket is worth buying.

But we’re only talking about a jacket, so the effect isn’t so terrible. What concerns me more is the use of this kind of promotional strategy in politics. Local elections are coming soon, and billboards are covered in posters promising all manner of wonderful but very loosely defined things, such as “hope” and “communication.”

The question of who gets to run your district, city or even country is a much more important one than what jacket you will buy, and yet these political salesmen and women are using very similar tactics.

I decided to write this column after witnessing a particularly egregious example. One politician near where I live is offering “Seoul’s dream and hope! Together with people!” Is it possible to imagine a more cliched and empty slogan than this? His poster doesn’t say anything about what that dream or hope actually amounts to. And “together with people”? Again, what does this mean? Is he really going to involve you in any decision he makes? Is he going to consult with you? This kind of empty sloganeering enables a politician to inspire in the voter positive feelings, without actually promising (let alone doing) anything.

Inspired by the poster, I decided to do a little research. I visited the websites of 48 different lawmakers from all parties. The only connection between them was that their family names began with a certain Korean character. Examining only headlines, slogans and section titles (which actually means very few words in total), I counted the incidence of words I considered mealy-mouthed and likely to distract the voter from truly understanding what the politician’s policies and ideas are.

Sixteen lawmakers - a full third - were offering “hope.” That’s an awful lot of hope! Eleven were offering “communication,” and nine even “happiness.” Another nine promised to be “with the people.” Very few actually listed specific policies or aims. All the way through, the websites I saw looked to be created with the intention of inspiring vague feelings of positivity and liking for the politician, without needing to do anything concrete in return.

The fact that the same words and phrases kept coming up time and again is itself interesting. Unlike in the advertising world, there is a lack of even creativity or variation in the practice of trite political sloganeering. And if it didn’t work, they would surely try something else - so one can only conclude that simply offering an unspecified hope or dream, and promising to do it “together with you” is actually an effective method of gaining votes.

As a side note, there were also a few who listed their academic record on the very front page of their personal website. Or, rather, a few of those who went to Seoul National University did. Personally, I would rather read about what the politician did for their district - but again, they probably wouldn’t display their academic backgrounds so prominently on their website if it didn’t help them win votes. One of those who played the SNU card also describes himself as “the power of our city”; on his Twitter account, he is also an “icon of young conservatism.” Clearly, he isn’t lacking in confidence!

Amid all the pride and vague sloganeering, one website stood out as a positive example. Instead of using empty language, one particular legislator has a prominent link on his front page via which you can request a meeting with him. Of course, I don’t know how often he actually does meet with his constituents, but at least one can say that he has a decent way of thinking. It is common where I come from for voters to be able to set up face-to-face meetings with their representatives, but whenever I asked friends in Korea whether they could imagine doing this, they mostly said, “No chance, that would never happen.”

A politician who is prepared to talk to you and answer your questions is actually doing something together with the people, rather than just doing the political equivalent of selling you an expensive jacket.

So the next time your representative appears on a big, shiny poster promising communication, hope and lots of other wonderful things, why not send a message to their office asking if you can sit down with him and hear his explanation about what they actually mean?