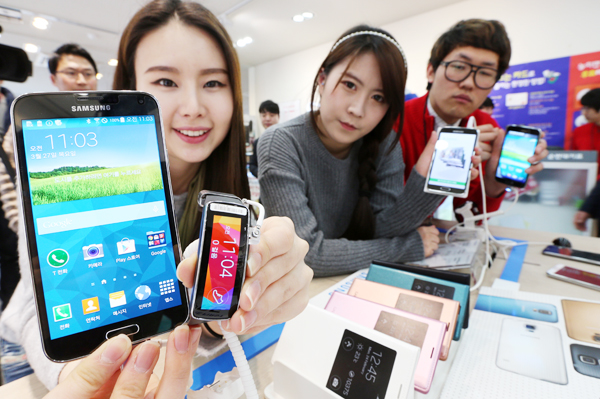 A salesgirl at an SK Telecom shop in Jongno District, central Seoul, demonstrates the Galaxy S5, which began to be sold through the country’s three mobile operators yesterday. The announced date for the phone’s release was April 11, but SK Telecom moved it forward to avoid a business suspension window starting April 5. [NEWSIS]

It is unprecedented for local mobile operators to sell a Samsung smartphone earlier than the company’s initial release date.

Samsung Electronics President Shin Jong-kyun denied the rumor of an early release when he met reporters on Wednesday. Samsung said the S5 would be released simultaneously in around 150 countries on April 11.

“We are sorry about their arbitrary decision to begin selling it without an agreement with us,” said an official of Samsung Electronics. The official said the company had provided the three carriers with some Galaxy S5s to support “marketing activities” of the phone. Neither the company nor the mobile carriers would say how many Galaxy S5s were supplied to the carriers.

Samsung expressed regret for what it called a “breach of trust” by the carriers.

But the early sales by the local operators - which could trigger similar decisions by overseas mobile carriers - could end up benefiting Samsung.

Early this month, the Ministry of Science, ICT and Future Planning slapped a 45-day business suspension on each of the carriers for selling phones to customers with excessive subsidies. The carriers were given different windows in which to serve out their suspensions. According to the schedule, SK Telecom, the nation’s largest operator with an approximate 50 percent market share, and KT, No. 2 with a 30 percent share, will be prevented from selling the Galaxy S5 to new customers on April 11.

During the suspensions, the carriers are only allowed to sell new phones to existing customers who have used their old phones for 24 months or longer.

Currently, SK Telecom is not in its suspension - although KT and the smaller LG U+ are - and it is selling the Galaxy S5 to new customers. KT and LG U+ are marketing the phone to existing customers.

SK, which enters its suspension on April 5, made the decision to “give customers a chance to experience the Galaxy S5 earlier than other companies,” said an official.

Samsung said it has yet to decide on any countermeasure, including whether it will stop shipping phones to the carriers until April 11 or other punitive steps. “We are confident that the issue would be addressed smoothly through talks with Samsung,” the SK official said.

SK Telecom began selling the S5 through its 3,000 shops across the country and its online sales agency T World Direct (www.tworlddirect.com). It said it will discount 100,000 won from the S5 price for all customers through May 19 and give a 100,000 won additional discount to customers who agree to stay with SK even after their contracts expire.

KT, which extends its sales of the S5 to offline shops today, had no immediate discount, but it is giving buyers half-price discount coupons for the Samsung Gear Fit, a wristband health tracker. LG U+, which yesterday launched both online and offline sales, said it will soon announce discount promotions for the S5.

The S5, seen as a moderate evolution from the S4, is Samsung’s response to a saturated smartphone market, in particular among high-end users. Rival Apple and Chinese handset sellers are strengthening their grip on the market with cheaper models.

Meanwhile, the S5 is being sold with a deactivated built-in heart rate sensor, one of the phone’s new features, due to legal concerns. The Ministry of Food and Drug Safety said on March 17 it will revise a related law to allow the function to be used on smartphones. Samsung expected the revision of the law be completed by April 11 and said owners of the phones will be able to activate the function later through an app.