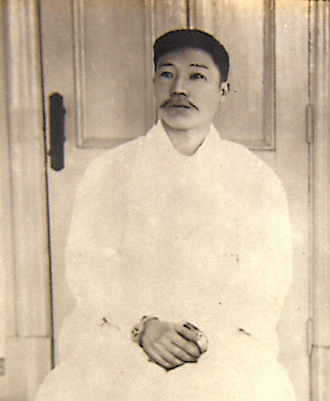 Korea and China are expected to join hands once more to honor Korean independence fighter Ahn Jung-geun (1979-10), this time through a movie project between the two nations led by a top Chinese film director.

The Korea-China Friendship Association and others involved in the project confirmed that the two countries are pushing to recruit popular Korean and Chinese actors to recall Ahn’s life. The Korean nationalist assassinated Hirobumi Ito, the first Japanese resident general of the peninsula, on Oct. 26, 1909, at a railway station in Harbin, China.

Zhang Yimou, an award-winning Chinese film director and producer, is currently being eyed to direct the movie, according to Lee Sei-kee, a former unification minister and senior adviser to the ruling Saenuri Party, who is also the chairman of the Korea-China Friendship Association.

With Zhang attached to the project, it is hoped that the movie will draw an international audience.

“Director Zhang said that in the film he would try to introduce and convey to future generations Ahn Jung-geun’s ideology, as well as his vision of love for the nation and peace in East Asia,” Lee said. “[He also hopes] the movie will further advance friendly cooperation between Korea and China.”

“Last year, director Zhang and I visited Korea, and he readily agreed to the movie’s production. ... The life and spirit of Ahn Jung-geun - who, at the young age of 30, gave his life for the sake of independence in his home country - transcends one nation, and is plenty of material to move both Korean and Chinese people,” added another Chinese source who is involved in the project.

His last film, “The Flowers of War” (2011), starring Christian Bale, tells the story of a foreign man who seeks refuge in a church with a group of women during Japan’s Rape of Nanking in 1937 during the Second Sino-Japanese War.

Zhang currently resides in the United States and just wrapped up his latest movie. He is expected to enter detailed negotiations for the Ahn project when he returns to China next month.

Kim Young-ho, a professor at Dankook University and the former minister of industry and energy, who is also a research expert on Ahn, is expected to serve as the film’s primary scriptwriter.

In January, China opened a memorial hall to honor Ahn in Harbin at the location where Ito was fatally shot. Chinese President Xi Jinping told President Park Geun-hye in bilateral talks earlier this week on the sidelines of the Nuclear Security Summit in The Hague that the memorial hall was constructed under his “direct instruction.”

In 1979, China and North Korea also collaborated on a film about the Korean independence fighter. Ahn was executed by Japanese officials on March 26, 1910, at age 30, and is recalled here and in China as a hero and martyr who fought for peace in Asia.

The Japanese government responded antagonistically to the opening of the memorial hall, with Chief Cabinet Secretary Yoshihide Suga calling Ahn “a terrorist.”