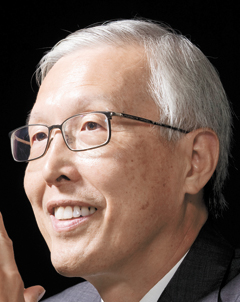 With the arrival of spring, fine-particle pollution has hit Korea once again.

Blown in by east-moving winds, most of this blanket of haze can be sourced back to China’s heavy industries hundreds of miles away. The pollution, produced when moisture in the air combines with fine-particle matter, creates a cloudy effect and often contains other substances, like smoke, nitrates or dirt.

Its presence is a major public health concern, and how to ameliorate the problem is a dilemma that remains a work in progress. “We shouldn’t ask China to take legal responsibility for the fine-particle dust problem, but we should ask them to cooperate with us to find a fundamental resolution to this problem,” Shin Gak-soo, the first chair of the Korea National Diplomatic Academy’s Center for International Law, said in an interview Monday with the JoongAng Ilbo.

He also stressed the importance of transnational efforts by Northeast Asian nations.

“With pollution problems, including fine-particle pollution, it’s difficult to figure out the epicenter and impossible to confirm the factual reasons without cooperation with other countries,” Shin said. “We need to take integrated action by launching a sort of cooperative organization among affected countries in Northeast Asia.”

Shin’s remarks come ahead of an international conference related to international law and policies on fine-particle pollution, scheduled for Thursday, which is hosted by the center and sponsored by the JoongAng Ilbo.

At the event, Cho Tae-yul, the second vice foreign minister, is slated to give a speech addressing resolutions for fine-particle pollution and international cooperation in the region.

“International environmental law, which can be applied to fine-particle pollution problems, is ‘soft law,’?” Shin said. “It is usually implemented as a nonbinding agreement or declaration. So the key is [voluntarily] keeping the obligations mentioned in an agreement.”

The affected nations could bring up the issue with the International Court of Justice, though such a move could prompt a diplomatic dispute and increase regional tensions, especially because it would be difficult to prove who should be held accountable.

“We should first figure out the exact situation in terms of fine dust coming from China and consider policy making to resolve the problem, as well as how to set up international obligations on the matter,” he said. “We need cooperation from each country every step of the way.”

Providing an example of international cooperation regarding transnational air pollution, Shin cited the Convention on Long-Range Transboundary Air Pollution, a pact signed in 1979 as acid deposition and pollutants became more prevalent in Europe with industrial expansion.

“At the time, Norway saw its lake acidifying due to [acid rain], and as a result, about 5,000 types of fish became extinct,” he said. “So all European countries participated in measuring the effects of acid rain and set up their own goals to reduce emissions.

“This cooperative system has effectively worked, drawing countries in North America and [Russia] as members. Now they have reduced emissions by 50 percent from their initial goal. .?.?.?The World Health Organization has already defined the fine-particulate matter as a material that causes cancer,” Shin continued, adding that the Chinese government is also showing its political will to take measures against environmental pollution.

“If China can’t resolve this matter by itself, we will be directly damaged. So we should seek out international cooperation as if this is just for us.”