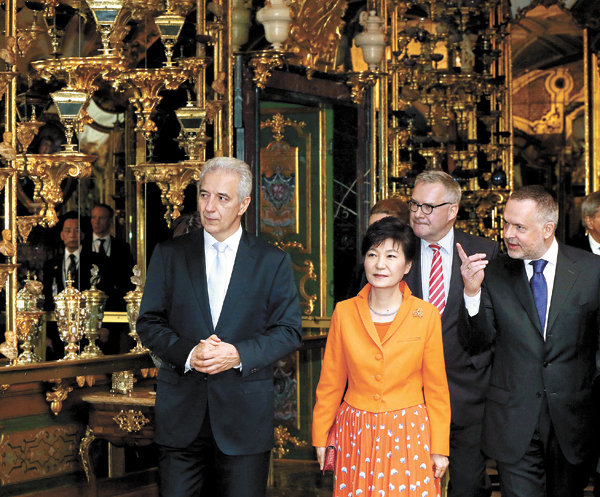 DRESDEN, Germany - Frauenkirche, a Lutheran church destroyed during the bombing of Dresden in World War II, is a famed landmark here in the capital of the German state of Saxony, which was located in East Germany before reunification.

The Church of Our Lady underwent a lengthy reconstruction period following the nation’s integration, and was only finished a little less than a decade ago. The project used 8,500 original stones salvaged from the ruins of the original church.

President Park Geun-hye chose the church as her first destination in Dresden after arriving in the city Thursday afternoon from Berlin. Her visit to the historic site, which embodies eastern Germany’s rise from ruins to an economic powerhouse, is in tune with her intention to obtain a blueprint for the unification of the Korean Peninsula while in Europe.

“President Park chose Dresden as the locale for her symbolic address to show both Koreas that unification may actually turn out to be an opportunity for prosperity,” a Blue House official said.

While visiting the city to meet with Prime Minister Hans Modrow on Dec. 19, 1989, five weeks after the fall of the Berlin Wall, Federal Chancellor Helmut Kohl delivered a speech in front of the ruins of the Dresden Frauenkirche, in which he promised economic aid and described his hopes for a common future within a united Europe. Dresden was the capital and royal residence for the Kingdom of Saxony and the cultural, political and economic center of Germany before World War II.

It was abruptly transformed into one of the poorest cities in East Germany, however, in the aftermath of a devastating bombing raid near the end of the war. About 85 percent of the city was destroyed, but the Communist regime postponed its restoration primarily because of economic difficulties and also in a bid to use the war-torn city to demonstrate the brutality of the Allied forces to the world.

East Germany adopted a policy of isolating Dresden citizens from the rest of the country. They were even blocked access to radio broadcasts from West Germany, making the city a source of ridicule. Many East Germans started referring to it as “tal der ahnungslosen,” or “the valley of the clueless.”

But unification in 1990 prompted Dresden’s rapid economic transformation. The city has recorded an annual average of 14 percent economic growth since 2000, becoming the center of information and technology. Dresden’s per-capita gross domestic product totaled $65,000 in 2013, compared to Korea’s $26,205.

Adding to its success, three research institutes, including the renowned Max Planck Institute of Molecular Cell Biology and Genetics (MPI-CBG), based their headquarters there following unification. Those think tanks joined hands with local universities, including the Dresden University of Technology, which conferred President Park an honorary doctoral degree and agreed to support manufacturing as well as entrepreneurial research and development activities.

“The city is a top example of how a city that was almost completely ruined and burned down has now been restored and possesses beautiful scenery,” said Rolf Mafael, the German ambassador to Korea.