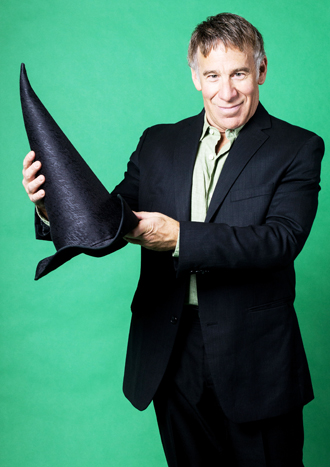 The hit Broadway musical “Wicked” is celebrating its 10th anniversary this year, and it is continuing to sellout theaters. Even in Korea, the local-language version that opened in November is still going strong.

The musical, based on Gregory Maguire’s 1995 novel, is billed as “the untold story of the witches of Oz.” Although the local production of the musical is in Korean, Stephen Schwartz, 66, the composer and lyricist of “Wicked,” came to Seoul last week to check out the show. His verdict? The Seoul version is in “really good shape.”

“Whether it’s the way the theater is designed - the acoustics of the theater - or the skill of the sound engineer, I thought that the sound and the orchestral blend was excellent here, maybe as good as I’ve ever heard,” Schwartz said during an interview with local media last week. Schwartz paid a brief visit to Korea and watched the show several times to see the different casts play the four leading roles of Elphaba, the Wicked Witch, Glinda, the Good Witch, the Wizard and Fiyero.

“I was also very impressed at the musical ability of the ensemble - how well they sang and how good their blend is and their diction. It also pleased me that there was so much laughter from the audience,” said Schwartz.

Schwartz is one of the most influential songwriters for theater and film, having written “Godspell” and “Pippin” and animated movies like “The Prince of Egypt” and “Pocahontas,” among many other popular works.

But Schwartz says “Wicked” is not just about the fun.

“The movie ‘The Wizard of Oz,’ for whatever reasons, has never really gone away in America. When I started working on the show, I began to notice that not a single day could go by without my encountering some reference to a line from ‘The Wizard of Oz’ on television, in a magazine article, in a newspaper headline. It’s so pervasive in American culture,” said Schwartz.

“But I think one of the reasons that it is sort of having a resurgence around the world, both through ‘The Wizard of Oz’ story and ‘Wicked’ itself, is that both the stories are about the difference between what people present in public, including political figures, and what’s going on behind the scenes.”

Schwartz explained that’s what “Wicked” is really about.

Despite having such political undertones in a musical, large portions of the audience are little girls dressed as Glinda and Elphaba. And Schwartz says that’s the charm of works of art, the different layers.

“People can appreciate them on different levels,” said Schwartz. “The story is basically about two girls that we care about and root for, but there are a lot of other layers. I don’t want to deny that there’s [political philosophy] in the story, but it doesn’t mean that if you are 8 years old, that’s what you are going to be seeing. You’ll be seeing it in a different way whether you are 28 or 48. That’s a tribute to the show and it’s something that I take pride in.” 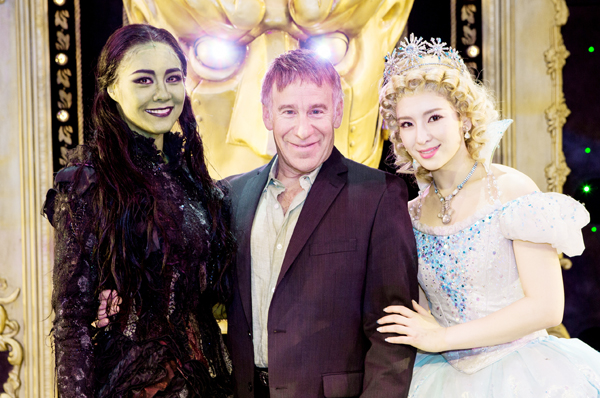 Stephen Schwartz, creator of “Wicked,” poses with Oak Joo-hyun, one of two actresses playing Elphaba, left, and Jeong Seon-ah, who is one of two Glindas, right, for the Korean production.Provided by the organizer

Although songs like “Defying Gravity” and “I’m Not That Girl” in the musical are often referred to as its major songs, “Popular,” sung by Glinda, is also quite, well, popular.

That’s probably because audiences feel exactly what Schwartz felt when he was writing the song. He wrote “Popular” in one go and didn’t make any changes.

“Some songs are easier to write than others. I think the reason is, if I’m really clear about what a song is about and who the character is who is singing it and what that character wants in the song, then it’s pretty easy for me to write,” said Schwartz.

“In the case of the character Glinda was very clear. The playwright Winnie Holzman really understood her and wrote her scenes in a way that revealed the character extremely clearly. So I felt I really knew her and I knew what she wanted in the scene. And I had known girls like Glinda in high school so it just seemed to be something I could get on the first try.”

“Writing music that you are passionate about and you care about and that means something to you,” is the advice Schwartz says he would give to Korean composers and lyricists who trying to create their own musicals.

“That’s the same advice I give to myself,” said Schwartz. “‘Wicked’ was a story that I very much wanted to tell. I heard about the book, the original novel, and set about trying to get the rights to turn it into a musical. I loved the characters, I loved the story of their relationships, I loved the politics of it and I loved the philosophy of it. So in writing the music, I just tried to respond to who these characters were, what their world was, what their emotions were and to find that in myself and in my own music.”

Although he has a favorite number, Schwartz says he’ll never tell what it is.

“One time, many years ago, I read an interview with a very well-known American composer who I admire very much,” said Schwartz. “In the interview, he was asked to name his favorite song and he did. And I found that from that point on, I could never actually hear that song again without thinking and trying to figure out why this particular song was his favorite. It sort of put something between the song and my own reaction to it.”

Schwartz said he has made subtle tweaks to the lines after watching the Korean production to allow Korean audiences to better understand the musical.

“In America, in the original production, American audiences are very familiar with the movie ‘The Wizard of Oz.’ So, for instance, there is a scene in the second act where Glinda is waving goodbye to somebody who has just left to go up the yellow brick road. In America, everybody knows that the person who has just left is the character Dorothy in the movie,” said Schwartz. “But in Korea, because everybody is not as completely familiar with the movie as American audiences, not everybody knows who that is. So we’ve added a line at the beginning of the scene where Glinda, as she’s waiving, to say, ‘Goodbye, Dorothy.’”