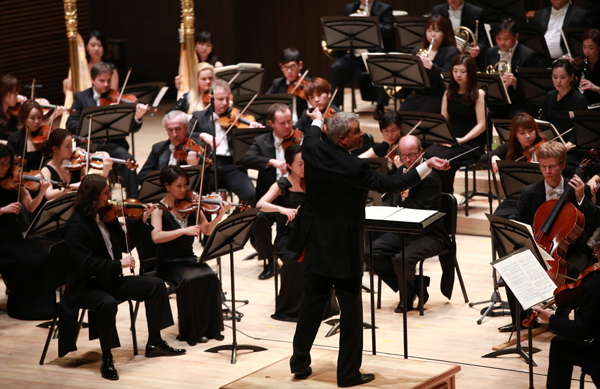 The Tongyeong Festival Orchestra opened the weeklong Tongyeong International Music Festival under the baton of Alexander Liebreich, the event’s artistic director, on Friday evening at the concert hall. Provided by TIMF

TONGYEONG - Classical music resonated from a large, newly constructed building over the weekend in this southern coastal city.

Dozens of visitors who approached the venue on Friday evening seemed excited, furiously pressing the shutters of their cameras to include both the building and the roaring ocean below in their shots. The edifice itself was an impressive sight, with its pristine white walls and sloped roof seemingly modeled off the sea’s breaking waves just meters away.

And this time, the Tongyeong Concert Hall opened its doors to festivalgoers. Organizers hoped that the new venue, which took more than three years to complete, would breathe new life into the event and allow visitors to “really enjoy this international festival, which started in memory of world-famous Korean composer and Tongyeong native Yun Isang,” said Floria Reim, CEO of the Tongyeong International Music Foundation. “After so many months and weeks of preparations, I am so happy that we are here today - that the hall is ready and our festival and our music can start today.”

The new center houses a concert hall for classical performances as well as a theater for staged productions.

“It’s been four months since I moved to Korea. And every time I talk to people in Seoul and they ask me where I live, and when I tell them I live in Tongyeong, they either laugh or they don’t believe it,” he said. 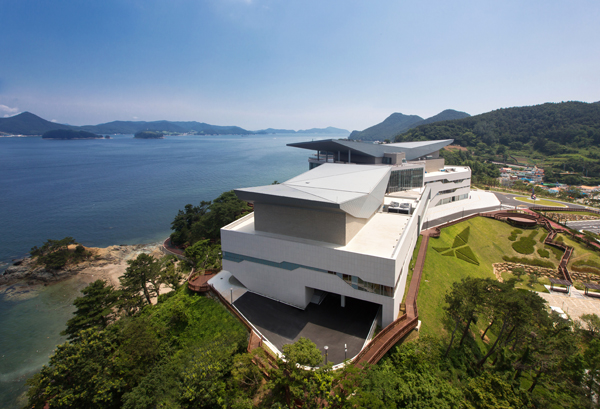 The new Tongyeong Concert Hall, situated on the sea in this southern coastal city, has a concert and theater hall as well as an Italian restaurant inside. Provided by TIMF

“It sometimes feels like Tongyeong is so far from anywhere else. But this hall is a great achievement for this city, and it’ll be a great asset not only for the people in this city and across the country but for the children of this city.”

Prior to Friday’s launch, approximately 600 elementary school students from Tongyeong were the first to catch a sneak peek of the festival’s orchestra program at the new hall.

“The first children’s performance in the new hall is only the beginning of an education series that we want to transform into something really unique in this country,” Reim said. “We want to present most of our programs and artists not only to adult audiences, but also to children.”

Reim said his goal was to invite more than 30 elementary schools in Tongyeong, which include nearly 8,000 elementary school students, throughout the year. He added that he hopes to nurture future generations as the next audience for this festival through educational programs that the festival foundation offers.

“I want to create a tradition,” Reim said. “I want to make it normal - to make visiting a concert hall something ordinary, everyday.” 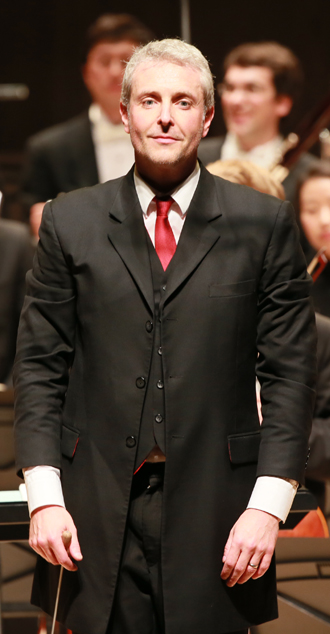 Salvatore Sciarrino, a resident composer in this year’s festival, agreed, stressing the importance of preparing a new generation, with the festival taking that first step.

“Molding a new generation is not only important to create a new future audience, but for the tradition of music in this country,” Sciarrino said. “We, as adults, know what tradition is, but tradition just doesn’t appear one day. There’s a starting point of tradition, and I believe that day is today.”

The Tongyeong Festival Orchestra, in collaboration with pianist Son Yeol-eum, opened the weeklong festival on Friday night under the baton of Alexander Liebreich, the artistic director of the festival. “The opening program is strongly dedicated to the theme of ‘Seascapes,’” Liebreich said. “We are playing Yun Isang’s ‘Fluktuationen Fur Orchestra,’ and B. Britten’s ‘Four Sea Interludes’ from [the opera] ‘Peter Grimes’ and Debussy’s ‘La Mer.’”

Liebreich has been an artistic director of the Tongyeong International Music Festival since 2011.

Remaining programs include the Artists in Residence agenda.

The Novus Quartet and mezzo soprano Vesselina Kasarova will perform tonight at the music hall, with pieces including Debussy’s “Violes” and Hugo Wolf’s “Italian Serenade in G Major.”

The National Orchestra of Korea is slated to perform tomorrow, led by conductor Won Il.

Programs will be presented until Thursday evening. The festival will conclude with the finale, “Hommage a Isang Yun,” on Thursday.

The festival also features the Asian Composer’s Showcase, which is in its second year. The workshop, organized by the Goethe-Institut, selects young up-and-coming musicians, who are tasked with composing original pieces for the event.

According to Reimar Volker, the director of the culture department at the Goethe-Institut, the institute will host and support supplementary performances by showcasing participants in other Asian cities. “[Getting an opportunity to re-perform] their work is considered the biggest challenge for young composers,” Volker said.

Reim added that he could guarantee visitors wouldn’t be disappointed.

“When you go to Sydney, there’s the [Sydney Opera House],” Reim said. “The building itself is really beautiful. But when you come here, there’s Tongyeong Concert Hall, and when you look outside, the scenery - I assure you - is more beautiful.”