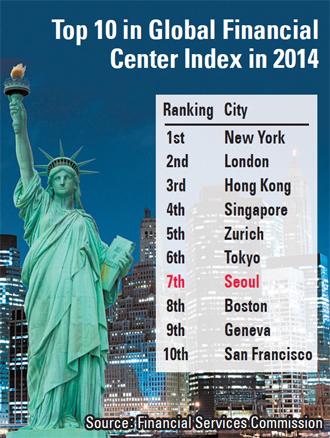 Seoul came in seventh this year in terms of development of its financial sector and related infrastructure, up three notches from September, according to a report released yesterday by a London-based consulting firm. The Financial Services Commission said the report showed that Korea’s capital city climbed to seventh place out of 83 countries ranked in the survey, indicating that its maturity in the financial field is improving each year.

In addition to Seoul, the country’s second-largest city Busan made its first entry into the ranking, taking 27th place.

Since Seoul was designated as a financial center by the group in January 2009, the city’s placement has continued to rise. It started at 35th place in 2009 and entered the top 10 for the first time in 2012.

Seoul ranked ninth in terms of financial human capital and development. It stood at eighth in infrastructure.

“The government’s efforts to make a great reputation for Seoul as a global financial hub are finally paying off,” said Koh Seung-beom, secretary general of the FSC.

“Busan’s new entry signifies that it has potential to grow as an international financial city,” he said.