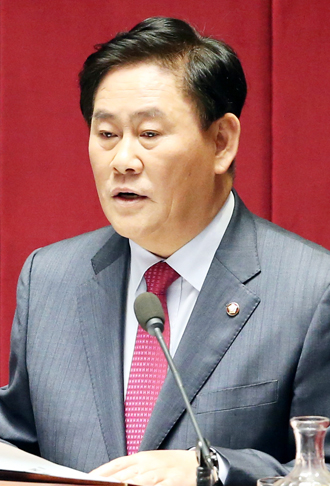 In a move to pass bills that lawmakers across party lines generally support, Saenuri Floor Leader Choi Kyung-hwan proposed to the opposition New Politics Alliance for Democracy that bills be sent straight to a vote, bypassing National Assembly committees.

Choi’s proposal, which he called a “green light” law, was made in an address to National Assembly members yesterday on the first day of a 30-day extra session.

“I propose to put green ribbons on bills that are not in dispute and load them on an express train to the plenary session,” said the three-term lawmaker.

Choi said if his proposed amendment gets passed, any bill that party floor leaders and the Assembly speaker designate a “green light” bill can be sent straight for a vote on the Assembly floor.

Choi’s “green light” proposal stems from the failure of the rival parties to pass a nuclear security bill last month despite President Park Geun-hye’s repeated requests ahead of a Nuclear Security Summit in The Hague last week.

Lawmakers from the former Democratic Party, which is now reconfigured and renamed the New Politics Alliance for Democracy, refused to pass the bill, which was meant to improve the safety of nuclear materials in domestic use, storage and transport, though they agreed with the need for its passage. Democrats demanded the Saenuri pass a set of broadcasting-related bills in return during the March session.

During his speech, Choi made an official apology to lawmakers for reneging on a presidential campaign promise to eliminate the candidate nomination system for city, county and district councils.

He said the party’s flip-flopping on the issue was justified.

“It is the utmost responsibility of a political party to nominate [qualified] candidates and let people judge them in an election,” Choi said.

“If a political party evades such responsibility and lets unqualified people run in an election, it would be tantamount to the dereliction of its duty.”

During the presidential race of 2012, the Saenuri Party promised to abolish party nominations for those positions.

Despite Choi’s plea for support for the “green light” law by the newly launched NPAD, which commands the loyalty of 130 lawmakers, it remains unclear whether it will give it.

“Everyone knows that the passage of the nuclear security and basic pension bills have been delayed because the government and the ruling party have broken their promises.”