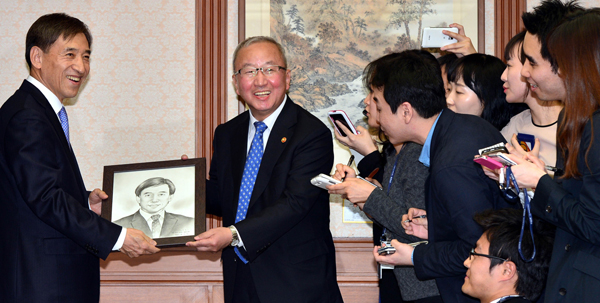 The first meeting between the nation’s top economic policy maker and its monetary policy czar raised the possibility of stronger cooperation between the Ministry of Finance and the central bank.

Finance Minister Hyun Oh-seok met with the new Bank of Korea governor, Lee Ju-yeol, who was in his second day at the job, at the central bank’s headquarters in central Seoul yesterday.

“As I understand it, Governor Lee is a person of exceptional leadership with balanced views on inflation, jobs, sustainable growth and crisis management,” said Hyun, who is also the deputy prime minister for the economy, before the two held a private meeting that lasted for 40 minutes. “He is a person who is trusted and has insight into the Korean economy.

“[I] expect that he will play his role as a governor concerned about the economy well,” the minister added.

The governor said that he was overwhelmed by the compliments.

The finance minister stressed that yesterday’s meeting was arranged so the two men could exchange views on the economy and try to balance out economic policies.

According to a statement released by the BOK after the meeting, the two men shared views over recent changes in the global economy and the impact they might have on the Korean economy, including the continuing of quantitative easing in the United States and decelerating growth in China.

Yesterday was the second time that a finance minister visited the central bank since 1999.

Usually the meetings take place in restaurants or at the office of the Federation of Banks in Myeong-dong, central Seoul.

In 2010, Finance Minister Yoon met with new central bank Governor Kim Choong-soo at the Federation of Banks building three days after Kim started as head of the central bank.

When Finance Minister Hyun, who started his job in March, met with then-Governor Kim for the first time, the two met at a Korean restaurant in Myeong-dong. The meeting took place three months after Hyun was sworn into office.

The fact that the meeting with the new governor took place a day after Lee took up his job - and that Hyun visited the central bank fresh off a 27-hour flight from Brazil, where he attended the Inter-American Development Bank annual meeting - came as a surprise.

Both the Finance Ministry and the BOK said that the exceptionally swift meeting was proposed by Hyun.

The quick meeting was interpreted by the markets as a sign that the finance minister is willing to step up policy coordination with the central bank.

When Kim became BOK governor in 2010, he sparked controversy by commenting that the central bank was part of the central government.

But Kim held interest rates at the same level that month and only complied in May. That was interpreted as defiance and the market still criticizes Kim, saying his show of independence cost the country economic growth.

Some analysts said yesterday’s meeting seemed to be intended to ease the market’s concerns about the new governor.

Lee is considered to have a hawkish stance that puts inflation control as a priority over economic growth. Since Lee was named the central bank governor, there has been growing speculation that the central bank will start tightening its loose monetary policy.