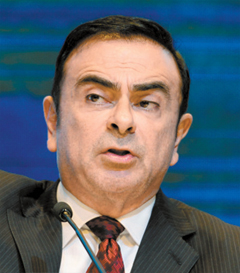 Ghosn, who leads the world’s fourth-largest automaker, yesterday told RSM employees that the group will support them in achieving the goal. RSM is Korea’s fifth-largest automaker behind Ssangyong Motor, selling 131,010 units last year.

“Success of RSM’s will be based on its own ability, not by competitors’ weakness,” said Ghosn, who is visiting Korea for the first time since July 2012. “I’m not worried about it.”

The company also set a goal to be No. 1 in quality in the domestic market while achieving the best product efficiency in the Nissan-Renault alliance to expand its role in the Asia.

RSM, in which Renault owns an 80 percent stake, had its best sales record in 2010 with more than 270,000 sales, but in recent years sales were cut in half.

The company offered a voluntary retirement program to its employees in order to cut the work force while introducing new and upgraded models, including the small sport utility vehicle QM3. It also pushed localization of 75 percent of auto parts to cut costs.

As a result, RSM reported it was in the black in 2013. Although sales dropped 8.8 percent to 3.3 trillion won, its operating profit was 44.4 billion won, with net profit reaching 17.1 billion won.

“Compared to two years ago, I feel much better about the situation in Korea,” said Ghosn.

The company plans to ship the car to North America in August.

Ghosn said the alliance might ask the Busan plant to increase Rogue production if the vehicle is successful in North America.

The chairman emphasized that RSM should not be seen as a “sub-contractor” of Renault or Nissan.

RSM’s Busan plant has an annual production capacity of 300,000 vehicles, but at the current level, including Rogue production, it turns out about 220,000 units per year.

“I’m absolutely not concerned about this capacity, because it allows lots of new products to come and contracts to be taken in the future,” Ghosn said, adding that the QM3, the small SUV imported from Spain, could be made in Korea if sales go well.

“The challenge today is not to work harder but to work smarter,” said Ghosn. “I want RSM to identify its weakness and fix it.”