Ahn lashes out at Pyongyang

Ahn lashes out at Pyongyang 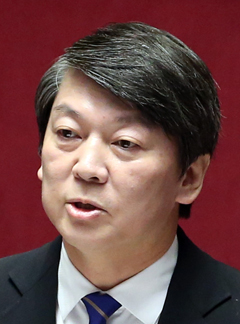 In his first address to the National Assembly as co-chairman of the largest opposition party, first-term lawmaker Ahn Cheol-soo took an unusually sharp jab at Pyongyang, saying its military provocations will only isolate the regime further and put inter-Korean relations in danger.

The stern warning from Ahn, who merged his supporters with the former Democratic Party to form the New Politics Alliance for Democracy, was an unusual blast at North Korea from a leader of the opposition, which tries not to offend the Pyongyang regime and is formally committed to engaging it.

Ahn has said he plans to be a conservative on national security.

“I sternly warn the North Korean regime,” said the former presidential hopeful yesterday in an address on the second day of a 30-day extra session. “Military action will put South-North relations in danger and will bring it further isolation from the international community. I urge it to stop further military action and come to the negotiating table.”

Tensions between Seoul and Pyongyang are rising following a series of provocative moves by Pyongyang, including its announcement Sunday that it will test a “new form” of nuclear weapon and its firing of shells Monday across the Northern Limit Line into Southern waters.

Ahn said in the speech that military provocation will not bring the hard-sought cash that the North needs or a resumption of business activities with the South. “Firing shells will not lead to the resumption of the Mount Kumgang tour business,” he said.

On President Park Geun-hye’s three proposals to improve inter-Korean relations, which were declared during a visit to Germany last week, Ahn said the opposition supports efforts by the government to improve ties between the two Koreas. He proposed a joint delegation of lawmakers from the rival parties visit Pyongyang.

In a speech in Dresden last Friday, the country’s first female president proposed setting up a permanent framework of humanitarian aid for North Korean mothers and infants and regular reunions of families separated during the 1950-53 Korean War. She also suggested an economic agenda for co-prosperity by developing the North’s infrastructure. She also proposed exchanges in culture, the arts and sports to restore a sense of Korean ethnic unity.

Former software mogul Ahn, who shares the top post of the country’s second-largest political party, which commands the loyalty of 130 lawmakers, also said inter-Korean summits “must be held.”

“If the government is now making preparations for a summit, it must share that information with us and the people and ask the opposition for cooperation,” he said.

Ahn also took the opportunity to attack the governing Saenuri Party’s reneging on a 2012 election promise to abolish its party nomination systems for city, district and county council members in the June 4 local elections. The Saenuri Party promised to hold open primaries.

Ahn pointed out that Park has not apologized for the flip-flop, although Saenuri Chairman Choi Kyung-hwan did in an address to the Assembly.