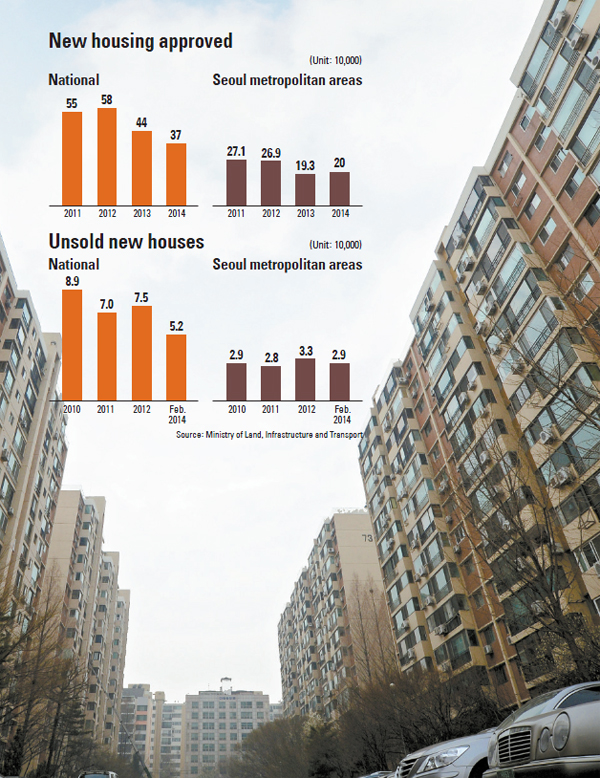 The government will continue squeezing the housing supply this year based on its estimation that the housing market is not recoivering quickly enough.

The Ministry of Land, Infrastructure and Transport yesterday announced its annual housing plan, approving 374,000 units for construction this year, down 15 percent from last year.

Busan will be hit with the largest cut, according to the ministry’s plan. In 2013, 29,900 houses were built there, but the ministry will allow only 9,700 this year.

The number of houses approved in this year’s plan will be the lowest since 2003. The objective of past governments’ housing policies was to address rising demand by expanding supply. But that approach seems to have been reversed this year.

“Maintaining the previous goal would only be appropriate for a market with rising prices and would negatively affect a sluggish market, causing prices to drop even more and freezing transactions,” said Kim Heung-jin, a director at the Land Ministry. “This new supply plan will help cement recent signs of recovery in the housing market.”

However, the ministry is relieved that housing prices have been falling at a lower rate. Prices in the Seoul metropolitan area dropped 1.1 percent last year, compared to a 3 percent fall in 2012.

The ministry believes the market has not yet normalized, considering the growing number of unsold houses nationwide. The focus of the ministry’s plan is to reduce the number of the empty new houses and stabilize housing prices. There were more than 52,000 unsold houses in the country in February.

Unlike the government’s expectations, experts say the reduction in the number of houses being built won’t have a major impact.

“This supply plan might help prevent prices from falling further as the government believes, but whether construction companies will follow the government plan remains to be seen,” said Kim Dong-soo, an official at Korea Housing Association.

“This annual announcement has no serious impact on the market,” said Park Won-kap, a real estate expert at KB Kookmin Bank. “Construction companies are more interested in how the rental market would change in accordance with the government’s plan to boost it by increasing tax benefits for renters and homeowners.”

The rental market plan announced in February, which makes renters who earn 70 million won a year or less eligible for a tax credit credit of 10 percent of their annual rent, is scheduled to be passed by the National Assembly in June.