Baek Se-jin (Yoon Si-yoon) is a celebrated professional golfer who enjoys rock-star status thanks to his excellent success on the golf course and gorgeous looks.

But after he loses his best friend in an accident, Se-jin finds himself stuck in limbo, unable to do anything or even talk anymore. He travels to a seaside town in South Gyeongsang where he meets his old high school teacher and some other people who will change his life. Director Kim Myung-kyun’s comedy is filled with several prominent actors, including Chun Ho-jin, Lee Kyung-young and Lee Byung-jun. But the most notable is Yeo Jin-goo, who is now a big star - he’s most likely the reason this 2011 film has finally earned a theatrical release.

Jung-gu (Byun Yo-han) is just an ordinary 20-something job seeker who doesn’t have anything special happening in his life.

To make his dull life a little better, Jung-gu develops homemade bombs as a hobby. Hoping to find someone outrageous enough to explode one of his bombs, he regularly sends out his handmade bombs to random people, but nobody cares. Then one day, Hyo-min (Park Jung-min), a man full of rage and dissatisfaction toward society, appears to Jung-gu, volunteering to explode the bomb.

Just as Jung-gu looks like he’s turned his life around, Hyo-min starts to press all his buttons until Jung-gu himself explodes (emotionally, that is).

The film is directed by Kim Jung-hoon, one of the hottest rookie directors at the moment, and the film was one of the three works funded by the Korean Academy of Film Arts.

The Weston family reunite in their hometown in Oklahoma after the patriarch Beverly (Sam Shepard) is found drowned at a nearby lake.

Although they’ve come together for consolation, it isn’t long before the bickering begins.

Beverly’s wife Violet (Meryl Streep) is a self-professed alcoholic who has very strained relations with all three of her daughters: Barbara (Julia Roberts), Ivy (Julianne Nicholson) and Karen (Juliette Lewis).

Barbara is close to getting divorced from her husband Bill (Ewan McGregor), who admits to “being involved with a younger girl” at the dinner table when Violet directly asks him about what’s going on between them. Ivy has a crush on her first cousin and Karen is the shyest of the three.

The movie is an adaptation of a Broadway play written by Tracy Letts.

Best known for his brilliant take on the classic English detective in “Sherlock,” Benedict Cumberbatch takes up a completely different character in “Wreckers.” In her debut film, director Dictynna Hood puts the focus on David (Cumberbatch) and Dawn (Claire Foy), a newlywed couple who have moved to the countryside.

While enjoying an extended honeymoon, they renovate the house, try to make their first child and raise chickens in their backyard.

However, when David’s younger brother Nick (Shawn Evans) suddenly returns from the military and becomes a third member of the family, everything starts to fall apart.

Nick reveal the secrets of David’s younger days to Dawn, which strongly disturbs her as she realizes that there is a complete different side of David that she doesn’t know. In the wake of his brother’s visit, the couple’s relationship takes a turn that neither saw coming.

This film is based on a true story from June 28, 2005, when the sniper Marcus Luttrell (Mark Wahlberg) and his four-man reconnaissance SEAL team traveled to the Hindu Kush in Afghanistan to kill a Taliban leader, in an operation known as Red Wing.

After Luttrell and his team - comprised of Michael (Taylor Kitsch), Danny (Emile Hirsch) and Matthew (Ben Foster) - are staked out on a mountain, an old man and two young shepherds discover them.

The team realizes that, in order to complete the mission safely and successfully, they probably would need to kill the three, which leads to long disputes about obligation and morality. But eventually they decide that killing the man and boys would be wrong, so they let them go, not knowing what the consequences would be.

Soon after, a Taliban team finds out about their operation and attacks with a much larger force. To make matters worse, Luttrell’s team loses connection with their headquarters and finds itself stranded in the remote countryside, being pursued by a determined enemy.

With Russell Crowe as the faithful Noah, Darren Aronofsky’s take on the Bible may be problematic for some Christians, as the director picks and chooses from the biblical version at random.

On the other hand, the film does offer some impressive visuals and a sense of spectacle.

Oddly enough for a movie based on the Bible, God is referred to only as “He,” “The Creator” or “Him,” almost never as just “God.” While the diction does bring a sort of neutrality that could in theory bring in audiences from all walks of faith, most of the time it’s just downright distracting and makes God seem like “he who must not be named.”

The U.S. version of the movie came with a disclaimer after test screenings with Christian communities drew complaints about the non-biblical changes (the distributor says it will not include the disclaimer in Korea).

This is where viewers need to remind themselves that this is a work of Hollywood, one that came with a price tag of $125 million. A typical retelling wasn’t in the cards. 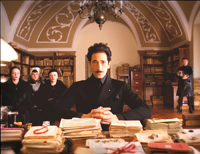 In this all-star whodunit by director Wes Anderson, you’ll be transported to a colorful world of pure imagination and delight.

With Tilda Swinton, Jude Law, Adrien Brody and Ralph Fiennes - among many more - each character comes with a unique story.

Their link is, of course, the luxurious Grand Budapest Hotel and its famous, if not a little too flamboyant concierge, Monsieur Gustave H. (Fiennes).

A hit with the older ladies that stay at the hotel, Gustave gets framed for the murder of wealthy dowager Madame D. (Swinton), who has left him a priceless painting upon her passing.

With Gustave locked up, it is up to the new lobby boy Zero (Tony Revolori) to clear his supervisor’s name with the help of managers of the ritzy hotels around Europe as well as his sweetheart Agatha (Saoirse Ronan).

The opulence of Europe between the two World Wars mingled with the dark, twisted humor promise a 100-minute ride that will leave an impression.