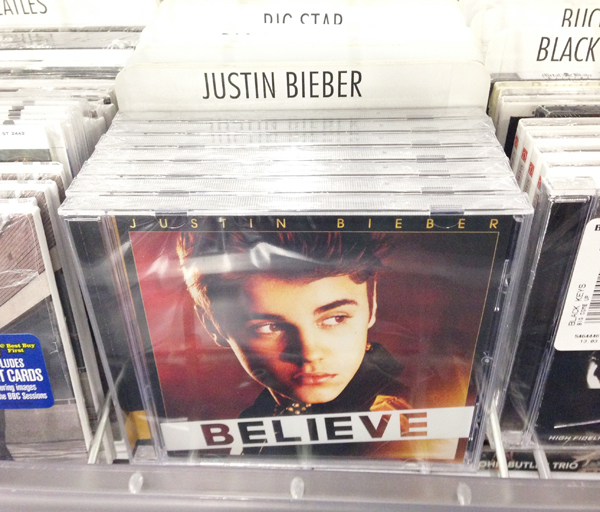 LOS ANGELES- An artist is making it difficult to believe there’s actually a copy of Justin Bieber’s latest album for sale in Los Angeles.

Paz Dylan, a 25-year-old electronic musician and artist known only as Paz, says he planted 5,000 copies of an album that appears to be Bieber’s “Believe” but actually contains a copy of Dylan’s own CD.

The fakes appeared at retailers such as Best Buy, Target and Wal-Mart on Tuesday, April Fools’ Day.

“We were meticulous,” said Paz, who fancies the stunt as more of a performance art piece than a gag. “We paid a lot of attention to detail because we wanted these to stay up on shelves as long as possible.”

The wrapped CDs resemble “Believe” right down to the bar code and silky Bieber portrait on the cover. However, Paz’s artwork is on the inside of the back cover, and the disc itself is slathered with images of cats, pizzas and a dog stuffed inside a taco.

The CD itself contains the 13 tracks from Paz’s synth-heavy independent release “From the Bottom of My Heart to the Top of Your Lungs.”

The only differentiating factor is that Paz’s subversive CD package lacks the kind of sticker that usually covers the top of a CD case, which is found beneath the wrapper of most unopened albums.

The Associated Press independently verified the stunt by purchasing random copies of what looked like Bieber’s “Believe” from widely scattered Los Angeles-area locations such as a Wal-Mart in Baldwin Hills, Target in Burbank and Best Buy stores in West Hollywood and Culver City, California.

In each instance, the CDs were scanned and paid for as if they were Bieber CDs. But when they were opened outside the store, each contained a copy of Paz’s album, not Bieber’s.

“Although Mr. Dylan is clearly not a Belieber, we know that many of our customers are, and we are taking care of those who didn’t get what they intended to purchase,” said Best Buy spokeswoman Carly Morris.

Target spokesman Evan Lapiska said the company was aware of the claim and was investigating the matter, while Wal-Mart spokeswoman Sarah McKinney said customers could return the CD for a full refund or the real version.

“We know that every great artist wants to get on the shelf at Wal-Mart, but there’s a right way to do it,” said McKinney. “All of our LA stores are making an extra effort to ensure this faux Bieber CD is removed.”

Why did Paz replace Bieber and not some other performer’s CD?

Paz said he wanted to use big-box retailers as his artistic canvas by “droplifting” his music into the hands of consumers.

Paz, who enlisted fellow artists for the city-wide switcheroo, declined to say how much it cost to produce the mock albums or what he did with the existing Bieber records on store shelves.