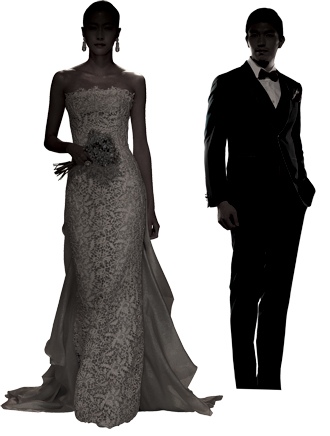 Usually, when a man in his 30s is in graduate school or between jobs, it is not considered a good time to start a serious relationship, let alone get married. But in 2012, a former office worker named Jang started dating someone he really liked, and last year they got married. Although he works in a public institution now, when he began dating, he said his life was full of “uncertainty.”

So how was Jang able to take the plunge? Despite the uncertainty in his life, the woman who became his wife was successful and very stable - and five years older than him. Oh, and she used to be his boss, too.

Now 35 years old, Jang says that his wife’s success is part of what attracted him to her.

"It was difficult for me to even take care of myself,” said Jang. “Thinking about marriage, where I would have to shoulder the responsibility of being a breadwinner, was too burdensome. But with her, I didn’t really feel burdened. I could just date her casually from the start.”

Having worked for 15 years, Jang’s wife had already purchased a home in Seoul and was financially secure. Plus, Jang said she had kept in shape and maintained a “baby face” thanks to working out and good skin care.

“We were in sync with each other. Plus, she didn’t look that old, so I quickly began to see her as a woman rather than a boss,” said Jang. “Unlike women who are younger than I am, I liked that she didn’t depend on me financially and mentally.”

Jang’s wife, who is surnamed Jeong, says that her husband’s biggest charm is that “he’s cute.” Before dating him, she says she didn’t really think about marriage.

“Of course I wanted to get married if the right guy came along,” said Jeong. “But I was financially well off and didn’t really feel the need to get married. I didn’t want to be married just because I had to ‘be married.’”

The two hit it off quickly after meeting each other during a casual dinner with friends after Jang left the company. She liked him for his “innocence,” probably because he hadn’t been through the corporate wringer.

“When women reach a certain age, like mine, we can be quite self-assertive - more so if we’ve been working for a long time,” said Jeong. 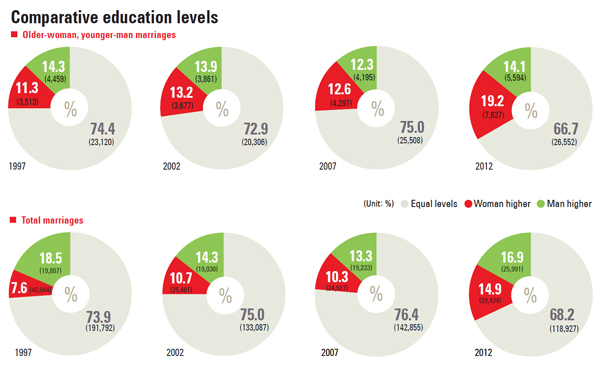 “So we tend to quarrel a lot with men our age. I guess many women around my age these days tend to be attracted to younger men who are relatively mild and softhearted.”

The change is probably related to “the collapse of the so-called gender roles in society,” Jeong mused.

There’s a consensus in Korea that financial changes are at the root of these types of relationships. “Gold Miss” is a term used in Korea for women with financial power who take charge of their own love lives. At the same time, many men want to lessen the financial responsibilities that come with marriage.

Women who marry younger men tend to have higher levels of education and higher salaries, according to data from Statistics Korea from 1997 to 2012. They also tend to work in the service sector or sales, fields where they need to take care of their looks.

In contrast, men who marry older women are increasingly jobless or are students.

In 2012, there were 39,738 marriages between older women and younger men, according to government data.

Of those marriages, for 7,637 couples, or 19.2 percent, the woman was more educated than the man.

Considering the fact that women have more education than their husbands in just 14.9 percent of all couples, the difference is striking.

As recently as 2007, in only 12.6 percent of married couples did the woman have a higher level of education than her spouse. But as women’s levels of education have gone up, the stereotype that the man needs to be more educated than the woman has weakened.

There was also a distinctive trend in occupations. Women in the sales and service industry - such as hair stylists or flight attendants - are growing more inclined to get married to younger men.

Lee Myung-gil, a dating coach at Duo, the country’s largest matchmaking firm, says that these changes do not mean men are growing more concerned about financial stability and less concerned about looks.

“As those women who are marrying invest in their appearances, they are able to maintain a younger-looking appearance and style,” said Lee. “The women working in the service industry especially take good care of their looks.”

Another trend is that women increasingly have higher incomes and professional positions than their husbands. Of those same marriages in 2012, women worked in managerial or executive positions in 17.2 percent of the cases.

In 15.7 percent of couples, women were working as professionals, such as doctors.

Experts say this trend represents the “collapse of the ABCD theory” - the idea that men only marry down, so A-level women were left with no one to marry but D-level men.

“As women’s level of education and economic status has gone up in recent years, it caused more men and women to become unable to find life-long partners,” said Jeon Gwang-hee, a sociology professor at Chungnam National University. “So there was a conceptual shift. The breaking of such a traditional view of marriage is a welcomed phenomenon.”

“Men these days were raised by their overprotective parents, so they feel comfortable handing over the leadership to females,” said Kwak Geum-ju, a psychology professor at Seoul National University.