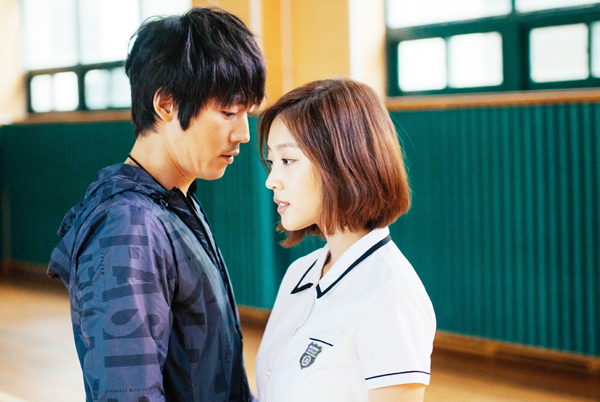 Jang Hyuk and Cho Bo-ah explore not just the dynamics of forbidden love, but the distinction between love and obsession in ”Innocent Thing.” Provided by Invent Stone

With a title like “Gasi” (which means thorn in Korean) and three formulaic leads - the seducer, the seduced and the faithful wife with a baby on the way - director Kim Tae-gyun’s latest film “Innocent Thing” practically writes itself.

The promotional poster of a schoolgirl with a come-hither stare as she sucks on a straw sends a clear message about the premise of the film. But for Kim, there was something else he wanted to explore rather than the dynamics of a student-teacher relationship gone wrong.

“I wanted to ask the question, is this love or is it merely an affair?” said Kim at a press screening on Wednesday.

Jang Hyuk, the male lead better known for his action roles, gets to keep his clothes on - for the most part - as he taps into some serious emotions as a conflicted man.

The 37-year-old plays Joon-gi, a physical eduction teacher and father-to-be who toys with the notion of taking things further with one of his middle school students.

The faithful trophy wife Seo-yeon is played by Sunwoo Sun, while the young temptress, Young-eun, is played by newbie Cho Bo-ah.

Despite the titillating promo materials, the trysts are kept to a minimum, (although they are heated) and instead the film focuses more on awkward situations where the three characters try and test each other’s limits.

Kim first encountered the screenplay seven years ago at a competition, and he was won over right away, captivated by the blurred lines between love and obsession.

Since then, he has worked on it between his other film and TV endeavors, trying to answer that question. But with the film done and dusted, the filmmaker admits that he’s not any nearer to an answer.

“After working on this movie I found myself asking, ‘Do I know what love is? Have I truly loved?’ And I also pondered whether most of us live in captivity because of love.”

His musings are clear to see in the film that he calls “an experiment” due to its eclectic mix of suspense, horror, melodrama and romance.

“I don’t know if I succeeded in my endeavor,” said Kim, who said his use of cinematography and camera techniques may confuse some, but nonetheless are essential in delivering the “feeling of being trapped.”

“I imagined that it’d be hard to relate to or emphasize with the characters,” said Kim, “because all three characters are extreme in one way or another.”

As he had time on his side, Kim has got his characters figured out, at least in his mind.

“I wanted the audience to not really get her [Young-eun], because that’s how suspense and fear is formed,” said Kim, saying he wanted the schoolgirl to embody both innocence and pure sex appeal.

To cast the right girl, Kim sifted through some 250 hopefuls before he chose Cho, a 23-year-old TV actress who had never tried the big screen before.

“She’s pretty, of course. But when you talk to her you get the feeling that she lacks something,” said Kim, noting that was how he also viewed Young-eun.

Cho, for her part, said that she found it difficult to relate to her character. “But I remember feeling pity toward her,” said Cho.

While puppy love gone wrong is frightening enough for most, Kim said there was someone else who sent chills down his spine.

“I think maybe Seo-yeon is the scariest of them all,” he said. “I’m not saying that she’s bad, but the way she loves someone is very much about keeping things contained.”

The man in the middle, Joon-gi, is, in Kim’s words, “a man who is tempted when a feeling he thought he wasn’t capable of feeling resurfaces.”

“Of course everyone can relate to getting the butterflies at some point,” said Jang, although he added that he personally couldn’t relate to a man tempted by a teenager.

“I’m not sure what the focal point of the movie is,” said Jang, confessing that he didn’t necessarily see eye-to-eye with the director’s take on the film.

“I know the characters can feel farfetched, but once you enjoy them for who they are, I think the movie will have a lot to offer. If you start off rooting for one character, you may be disappointed.”