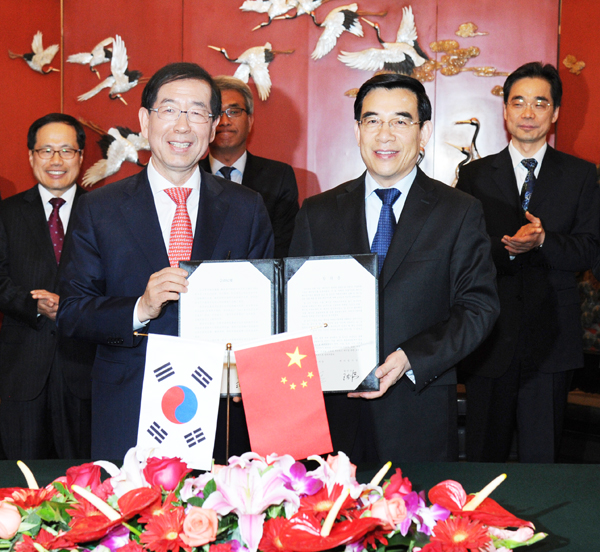 Seoul and Beijing yesterday signed an agreement to jointly resolve the increasingly detrimental effects of fine-particle matter coming from China, which has been found to be the main source of cross-border air pollution.

Particulate matter smaller than 2.5 micrometers in diameter - less than the circumference of a single human hair - also known as PM-2.5, is particularly hazardous and can be dangerous when inhaled by humans, causing a slew of respiratory diseases and infections.

The agreement for close municipal-level collaboration came as the pollution from China has continued to plague its neighbors, including Korea and Japan, in recent years.

But this is the first time that a Chinese city inked a formal agreement with an overseas city or nation to tackle the issue.

The two cities will cooperate to develop policy and technology against fine particles, according to the agreement announced by Seoul Mayor Park Won-soon and his counterpart Wang Anshun during Park’s visit to China.

The two city governments will form a division responsible for spearheading the collaborative effort and request state-run research institutes to conduct a joint survey.

The two Asian cities will co-host a forum in September in Seoul that will address enhancing air quality. Environment experts and government officials will also gather to discuss how they can administer policies and compare successful cases.

During his one-day visit, Park visited a Beijing observatory that measures air pollutants and later attended a local forum on air quality.

“Through the agreement, the two cities laid ground to exchange knowledge and experience so that government officials will have better idea of how to keep air pollutants at bay,” Mayor Park said. “We will regularly meet and talk about the issue in order to protect citizens from fine-particle [pollution].”

Since winter, the city government has been kept on high alert against these tiny particles, which have choked the city in a noticeable haze.

Blown in by east-moving winds, much of this pollution can be sourced back to China’s heavy industries hundreds of miles away, researchers of the National Institute of Environmental Research attest.

The Ministry of Environment and the National Institute of Environmental Research said that they detected abnormally high concentrations of air pollution 19 times last winter, in which the amount of particle pollution exceeded the safety threshold of 100 micrograms per cubic meter for 12 hours. The record far exceeds that of 2012, which only recorded three instances of abnormally high air pollution.